The Aoi Matsuri (葵祭) is one of Kyoto’s three most famous festivals (along with the Gion Matsuri and Jidai Matsuri) and takes place every May 15. The festival’s main attraction is a large parade in Kyoto, in which over 500 people dressed in the aristocratic style of the Heian Period (794-1185) walk from the Imperial Palace to the Kamo Shrines. Aoi is Japanese for Hollyhock, and the festival is named after the Hollyhock leaves that are worn by the members of the procession.

Predating Kyoto’s establishment as the national capital in 794, the Aoi Matsuri began in the 7th century, although its precise origins are uncertain. There were most likely natural disasters occurring that were believed to be caused by the deities of the Kamo Shrines. After the Emperor made offerings to the gods, the disasters subsided and a tradition was begun. The festival’s official name remains Kamo Matsuri, because of its association with the shrines. 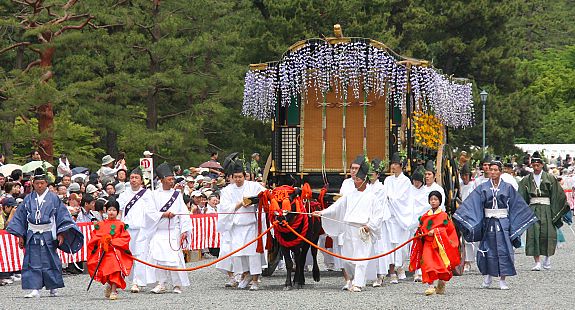 The festival grew in prominence so that during the Heian Period the word festival became synonymous with the Aoi Matsuri. Nowadays, the massive procession illustrates the high regard in which the festival would have been held. There are men on horseback, giant bouquets of flowers, ornately decorated ox drawn carts, and a large retinue of women in kimono accompanying the year’s Saio.

Traditionally, the Saio was a young female member of the imperial family who served as the high priestess of the Kamo Shrines. During festivals, the Saio performed rituals at the shrines. In the modern era, a different unmarried woman from Kyoto is selected each year to serve as Saio. She must go through purification ceremonies before the festival, and is taken through the procession on a palanquin.

The Saio during the morning procession

The parade begins at 10:30 at the southern gate of the Imperial Palace, and crosses the river in front of Shimogamo Shrine at 11:15. Ceremonies are performed within the shrine for about two hours before the procession departs for Kamigamo Shrine, where the head of the parade arrives around 15:30. Watching the entire procession pass by, from beginning to end, takes about one hour.

Paid seating is available at the Imperial Palace and both Kamo Shrines. Without reserved seats, it is advised to arrive early if you intend to see the parade at the Imperial Palace or the Kamo Shrines. The crowd is sparse along the rest of the route, but watching the parade on a regular city street does not provide the same atmosphere. In the days before the festival, related events are held at the shrines, such as horse races and the purification of the Saio and her attendants.

Get There and Around

The procession departs from the Imperial Palace, passes through Shimogamo Shrine and terminates at Kamigamo Shrine:

Lodging in the “Ninja Capsules” At B...

Kanda Matsuri - One of The Popular E...