Tokyo hasn’t seen anything like this since the Bubble Era. Every night in a basement in Shinjuku’s Kabukicho district, bikini-clad women stage mock battles using enormous robots – though it’s more steroid-enhanced fairground attraction than modern-day Gundam. Robot Restaurant looks like something straight out of Gaspar Noé’s Enter the Void, all migraine-inducing neon, video screens and mirrors.

Much ink has been spilled about Tokyo’s famed Robot Restaurant: the capital’s “most entertaining show,” “crazily creative,” “the highlight of your trip,” while rumor also has it to keep your expectations low, as the sushi isn’t that great. Fair enough.

The truth is that nothing written or caught on camera can truly capture the experience or do it justice. This ¥10 billion show baffles your conception of what’s “normal,” and it’s also constantly evolving. It’s becoming an even more bizarre encounter for travellers: four years ago, the inaugural show’s allure were the barely dressed girls riding on LED-covered tanks, but the Robot Restaurant today has a hidden storyline—something we can all relate to.

Let’s get one thing out of the way: despite its name, the Robot Restaurant isn’t much of one. And, no, you won’t find robots serving you, either. In fact, most meals there are on par with what you would get at your local cinema—popcorn, chips, chicken, snacks and basic drinks. The special on the daily menu is a bento box of sushi for an extra ¥1,000. But you aren’t (and shouldn’t be) visiting the place for its food. The Robot Restaurant is ultimately an energetic live spectacle. A breathtaking one, to be precise. Nothing more, nothing less. 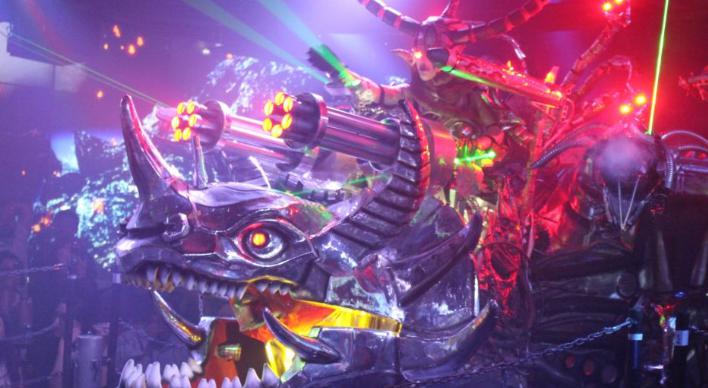 The adventure begins at Robot Restaurant’s dazzling lounge, which—with its red, seashell-shaped sofa chairs, gaudy ceiling lights, garish screens and imitation gold across the entire floor—is reminiscent of a themed international hotel and casino. Here, visitors can enter up to 50 minutes prior to showtime, enjoy a drink and snacks with live music performed by a trio of robot-costumed musicians—who still manage to play some of Tokyo’s best covers of popular Western ballads. This is itself is a jaw-dropping experience, but it’s just a prelude to what comes next.

Ten minutes before the show, we were guided into the theater, a dark and cramped venue located two floors below the lounge. We could hear loud drum sounds from backstage and this is where the madness began. Glaring ladies performed to blasting music, a giant dragon cruised around, a kabuki actor mimed and a guitar-playing cyclops kept it cool amid the pounding of Japanese taiko drums and colorful, disco-style laser beams criss-crossing the stage. The cacophony was mind-blowing and the thunderous drumming felt like a blow to the head. It dragged us into the show—and made us want more.

The rest of the night featured things many of us have only seen in our wildest dreams: a battle between good and evil, ladies riding giant snakes and spiders, lasers, fireworks, explosions, fighting pandas, mermaids on sharks, creatures eating robots, glow-in-the-dark men dancing to Michael Jackson tunes, fire shooting, more fire shooting, loudness, madness—and then silence, just for a moment, before the crowd erupted into loud applause.

The show culminated with a wild parade featuring all performers (including robots, of course) dancing to songs from Dreamgirls in complete chaos. The music clashes, the drums beat, dancers shimmy and the whole audience sings along. There were handshakes, kisses blown, bows from staff, lots of laughter, cheer and a sense of joy and satisfaction you’ll find yourself not wanting to end. 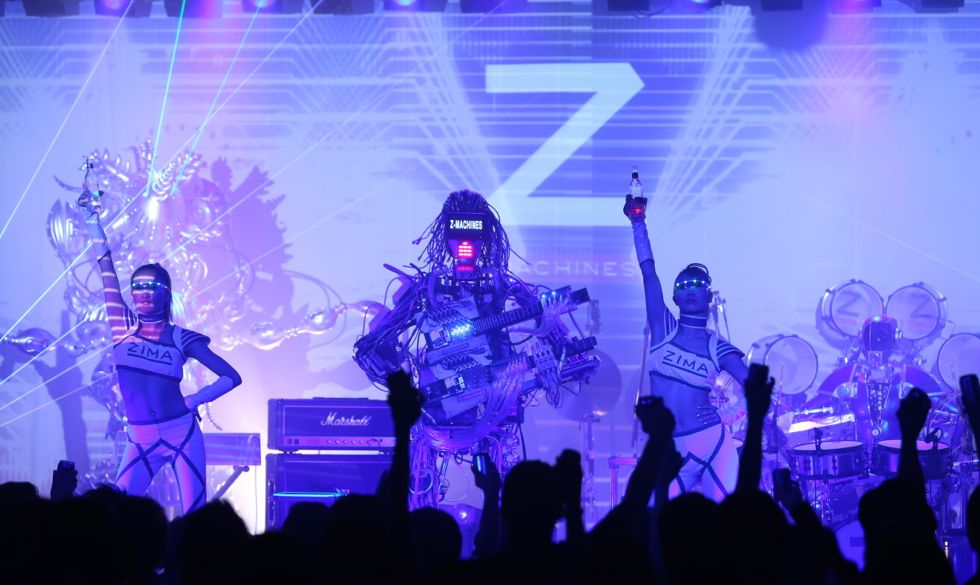 As we were leaving the show, we found ourselves talking about it over and over again, not entirely sure how to explain what we had just seen. Was it a robot show? Not entirely. Was it a Japanese cultural performance? Sort of. One thing we agreed on, however, was that it was perhaps the most exquisitely (though maybe not purposefully) arranged commercial demonstration of what the modern entertainment industry is all about—the endless pursuit of _dreams.

The show’s production is dubious. It’s reckless. It’s messy. But it’s also simultaneously addictive, leaving you thinking and rethinking it long after you’ve left the theater.

Much is said about the Robot Restaurant, but take our advice—go and then judge for yourself, whether or not you’re into robots, Japanese techno or dancing girls or just the experience itself. It’s one of those encounters that can remind you of what’s most important in life and to just keep dreaming—without succumbing to the barriers and borders of socially-accepted “normalcy.”

The Cult Of Chanbara | Japan Guide

The 6 Popular Long Seller Snacks in ...