Although many words with the compound 「道」 (pronounced as dō) have been appropriated into the Japanese lexicon—words ranging from sadō (茶道, “The Way of Tea”) to kadō (華道, “The Way of Flowers”) to shodō (書道, “The Way of Calligraphy”)—it was a first for me to learn about another “way” of delving deeper into Japanese traditions and deepening one’s dedication to a single artform.

On a recent trip to Kyoto, our tour group visited a long-established incense shop that has been opening its doors since the Edo Period. It was at Yamada-Matsu Incense Wood Co., Ltd. (山田松香木店) where we partook in an exquisite incense ceremony and were enlightened about the practice of kōdō (香道, “The Way of Incense”).

While the mention of burning incense may conjure up imagery of a religious ceremony or an offering for the souls of the deceased, incense burned for the purpose of pure entertainment has been in practice among Japanese aristocrats since the 13th century. In similar fashion to tea ceremonies, kōdō is a refined art form that follows complex observances and ancient etiquette regarding the preparation and participation in kumikō (組香), an incense game in which players must distinguish and differentiate various types of incense on scent and memory alone. 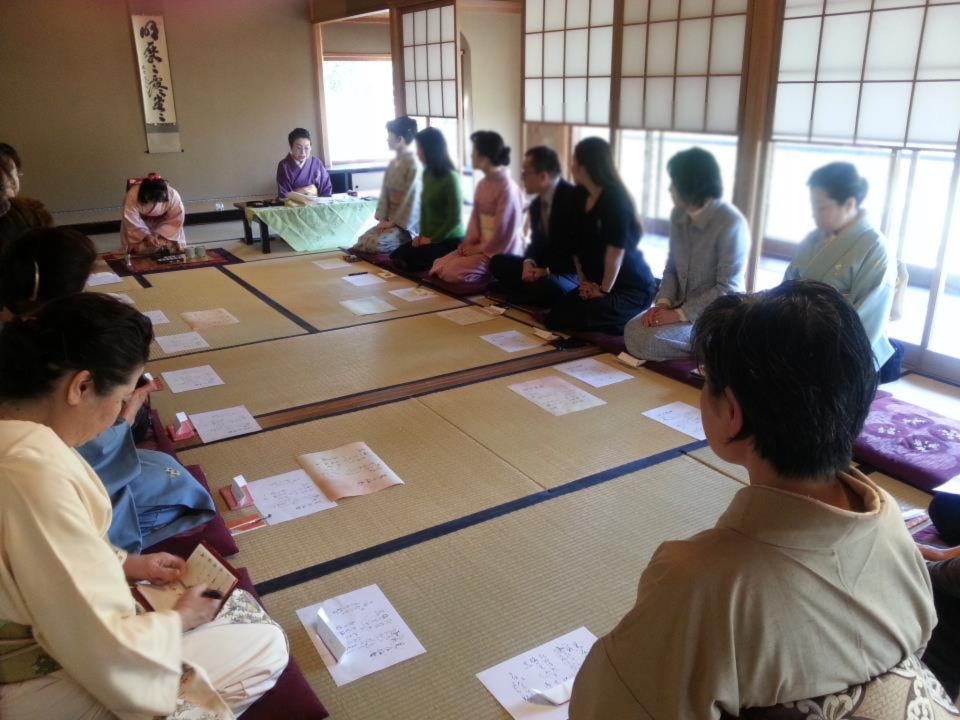 Conducted completely in silence, we were only provided with writing paper, a calligraphy brush, and ink to record our hypotheses as three incense burners perfuming with aromatic wood chips (kōboku, 香木) were slowly passed around, one at a time. Traditionally performed in a Japanese-style tatami room, our group of twelve was arranged in a U-shape with our attention directed to the teishu (亭主, the host/ess of the ceremony) and the kōmoto (香元, the incense presenter), who took a couple of deep inhalations once the hand-glazed kōdō cup was properly prepared then proceeded to pass it to the left with a bow.

Customarily, the optimal number of participants for an incense ceremony is ten guests, with the honorary guest seated to the left of the kōmoto as the first recipient of the kōdō cup. As we watched in veneration the successive steps required to perform this classical ceremony, it dawned on me that both parties—the incense preparer and the participants—were, in fact, actively involved in this self-indulgent pastime. Guests must also mindfully direct their attention to the fragrance of each aromatic wood and classify the sampled set of incense under one of five poetically named combinations such as “The Neighboring Plum” (隣家の梅), “Snow on a Lonely Peak” (孤峰の雪), and “Morning Dew on Pampas Grass” (尾花の露).

Furthermore, contrary to the act of smelling fragrances, participants must “listen” (kiku, 聞く) to the incense—deeply inhaling the scent with one’s whole being. In other words, practitioners and participants of kōdō not only breathe in the scent through their nose, but also allow for the fragrance to linger in their “mind’s eye” and awaken their senses to the present moment.

Hailing from San Francisco, I can unabashedly say that a portion of my youth was spent frequenting the hippie-counterculture streets of Haight-Ashbury, where I was exposed to a myriad of incense-burning stores that honed my appreciation for exotic, musky, and spiced scents. Namely, I was feeling confident before beginning our round of kumikō. However, this confidence began to cease when I was hit by the complexity of each smoky vapor arising from the mound of ash.

Nevertheless, as I cupped my hands around the kōdō cup to catch the lines of incense folding and rising with each gentle breath of air, I felt myself suspended in time and intensely aware of my relationship with the movement of incense smoke and its perfuming scents. Similar to the modern adaptation of aromatherapy, these differing scents trigger the mind and draw connections with the corresponding season and occasion at hand. The purpose of kumikō is not to determine who wins or loses, but rather to revere and relate to an age-old tradition whose inspiration was ignited by classical Japanese poetry and literary masterpieces (particularly, The Tale of Genji).

If you ever find yourself in Kyoto and are interested in unwinding the mind through kōdō—the art of incense perfected by time, I would suggest taking a monkō (聞香, “listening to incense”) workshop at Yamada-Matsu Incense Wood Co., Ltd. that is perfect for both beginners and self-professed incense aficionados. While learning about one of Japan’s oldest forms of incense appreciation, you’ll be whisked away on an aromatic journey, far away from the demands of daily life.

A Travel in Ueno | Japan Guide