Picking up from where my last post left off, after thoroughly enjoying an array of attractions in Hiroshima, I found myself waiting to catch the Ichibata Highway Bus, conveniently located in front of Hiroshima Station, to another intriguing destination—Shimane Prefecture’s Izumo, a city steeped in ancient Japanese folklore and revered to be the heartland of the gods. Fast-forward three hours on a scenic bus ride through misty mountains and stretches of land untouched by civilization, I finally arrived at Izumo-shi Station, where I would later catch a local Ichibata Railway Bus, operating every 30 minutes, to Izumo Taisha (Izumo Grand Shrine) at a budget-worthy fare (￥510 one way/approximately 25 minutes).

So what is all the buzz surrounding Izumo Taisha, venerated as one of the most ancient and sacred shrines in Japan? Well, one reasoning behind the longstanding adoration of this spiritual landmark can be traced back to the realm of myths and legends recorded in “The Kojiki” (“Records of Ancient Matters”)—the oldest compilation of literary texts, dating to the early 8th century, that chronicles the core formative years of Japan. The narrative not only provides a panorama of life as lived in prehistoric Japan, but also brings to light Japanese beliefs about the creation of the world, the origin of the gods (“kami”), and the divine descent of the country’s emperors, whose lineage was directly linked to the sun goddess of the Shinto religion, Amaterasu.

One myth in particular places Izumo Taisha on the “en-musubi,”or marriage map—“en” (縁) referring to all connections, big or small, and “musubi” (結び) meaning to tie or to connect. During the tenth month of the lunar calendar, also known as the “Month of No Gods,” or “Kannazuki” (神無月), the “Yaoyorozu no Kami,” or Eight Million Gods, are believed to leave their shrines and temporarily reside at Izumo Taisha, where they predestine new relationships and bonds that will be formed between people the preceding year. It’s not bewildering then, that the female visitors, including myself, visibly outnumbered the male counterparts. Perhaps with hopeful hearts filled with the desire to “tie the knot,” they performed the customary prayer method (two deep bows, followed by four handclaps, completed with one final deep bow) to the chief god of Izumo, Okuninushi no Kami (大国主神), who is also believed to be the enshrined deity of matchmaking and is celebrated at this time-honored “love shrine”. 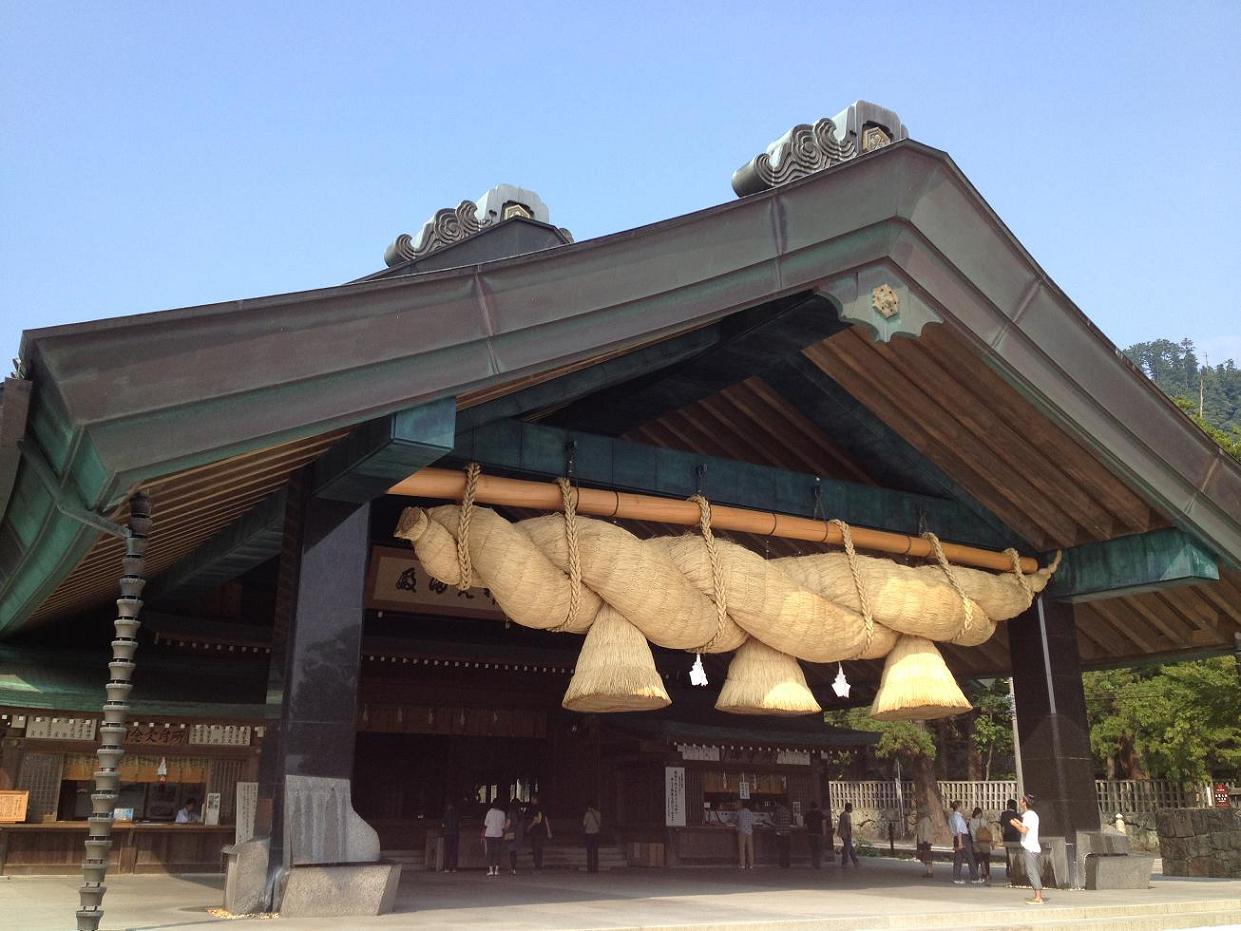 Another striking feature of Izumo Taisha is the colossal, twisted straw ropes known as “shimenawa” (注連縄) that hang over the main entrance of the prayer hall after passing through the fourth and final torii (shrine gate). These straw ornaments that adorn the archway of Shinto shrines not only signify a sacred space but also ward off the physical world from the resting place of the gods. This stunning symbol of Shintoism could even be seen on shopping streets and storefronts—even featured as the decor of soba restaurants serving up a local specialty called “Izumo soba,” or buckwheat noodles served stacked on top of three lacquered bowls—making it synonymous with the Izumo region. It’s also noteworthy to mention that before approaching Izumo Taisha’s Front Shrine, visitors must pass through a total of four torii gates each constructed out of various materials—starting with stone, wood, metal, and the final gate from bronze.

Because Izumo Taisha is also nestled near the Sea of Japan coast, I managed to walk a short kilometer to another mystifying shrine situated just inches away from the sea. If you look up at the colossal rock formation on Inasa-no-hama Beach—a sacred stretch of land presumed to annually welcome a myriad gods—you can make out a small yet prominent shrine perched on the rock’s peak. Benten-Jima Shrine is the sanctuary of the enshrined female sea deity, who is said to keep watch over seafarers from her divine sitting stone sheltered by a looming camphor tree. Although I marveled at this presumed “power spot” at high noon, visitors are highly recommended to pay a visit at sunset, when the sky is tinted an opulent shade of crimson and forms a red halo behind the curiously shaped stone. 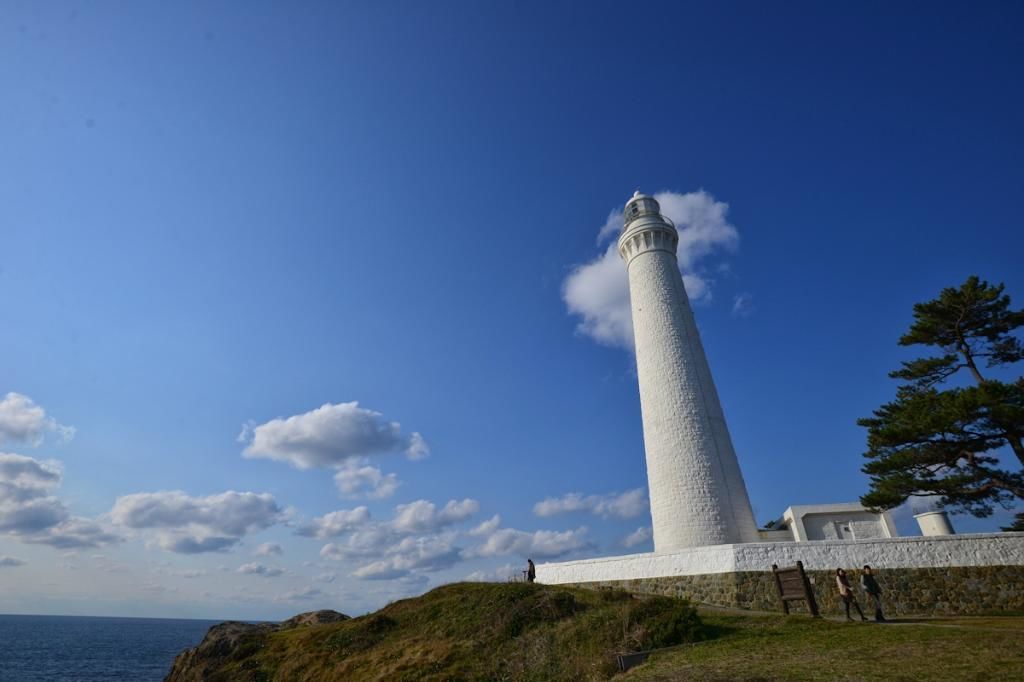 To conclude my whirlwind tour of Izumo, I made my way up north to two must-see destinations located near a small fishing village on Cape Hinomisaki. Feeling pressed for time, I opted for a taxi to take me around the remote yet attractive Izumo coastline, where the towering Hinomisaki Lighthouse and the vermillion-lacquered Hinomisaki Shrine were saved as the last leg of my excursion. This historic lighthouse built in 1903—borneing the title as the highest masonry lighthouse in Japan—offers a panoramic view of rugged cliffs and protruding coastlines roughly forty meters from the top of the landmark. From there, the lively taxi driver took me up a winding path that led to an obscure nook that housed the far-famed vermillion Hinomisaki Shrine. I immediately noticed an array of exquisite animal carvings, from mythical dragons to real-life creatures, that adorned the pillars and pagodas of this shrine dedicated to the Goddess of the Sun, Amaterasu. After solemnly walking through the sacred court grounds, I managed to catch another extraordinary spectacle en route to Izumo Airport—the sun setting amidst a prismatic rock overlooking the Japanese Sea, where a flock of black-tailed gulls soared among the scenic orange sunset.

For those itching to take a spiritual journey to this land enveloped in myth and mystery, the ideal travel route would be by plane from Tokyo (Haneda) to Izumo Airport. Japan Airlines offers an exclusive discount—a one-way fixed fare of ￥10,800—for foreigners visiting Japan on their Japan Explorer Pass. With the advantage of a short flight time (an hour and 25 minutes to be exact), you, too, can absorb the awe-inspiring natural settings and sense an omnipotent presence that can be traced back to the origin of the name “Izumo” (出雲) itself, which translates to a place “where the clouds ascend” and the heavenly gods set foot.

Origami – One of The Popular Culture...