Nagano prefecture has many tourist sites and is also famous for its onsens.
Azumino is a beautiful village of Nagano prefecture situated near the Japanese Alps. The beauty of this village area surrounded by the mountains touching the blue sky, greenery of the farmlands and the rivers flowing from the mountains are fantastic with its artistic appearance. A weekend trip to Azumino of Nagano prefecture was really a nice experience that let us to stay away from the busy life. A few hours of life mingled with nature, enjoying its real beauty in the fresh atmosphere at the valleys of Alps provides a new energy. We stayed in a Ryokan where we enjoyed the hot spring bath and delicious Japanese food. Then visited the Daio wasabi farms, the Zenkouji temple etc. The statues named Dosoujin could be seen in many parts of Azumino on both sides of the road. And also Azumino has its locally made Oyaki, a grilled wheat dumpling. 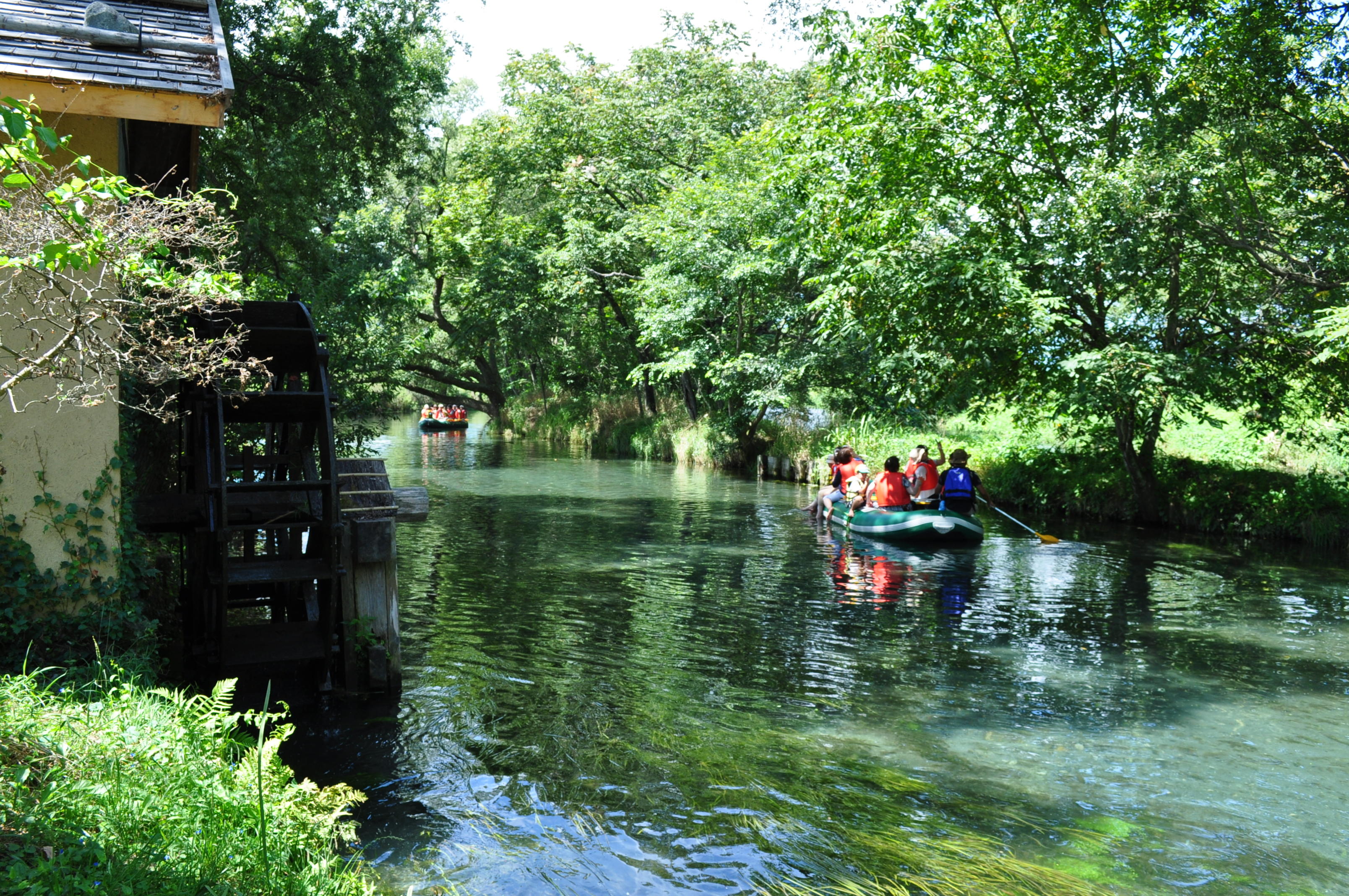 Daio wasabi farm is one of the most important places we should visit while in Azumino. We may find the spicy wasabi paste of light green colour aside many Japanese dishes. It is commonly seen with the famous Japanese dish, Sushi and we can see a lot of wasabi flavoured snacks. Azumino area is famous for the cultivation of the most delicious Wasabi. The farm of Wasabi is extending over the valleys of the Alps ranges pampered by the cool breeze and the cool water flowing from the mountain ranges. The fresh water coming down from the mountains is the secret of the tasty Wasabi of this area. 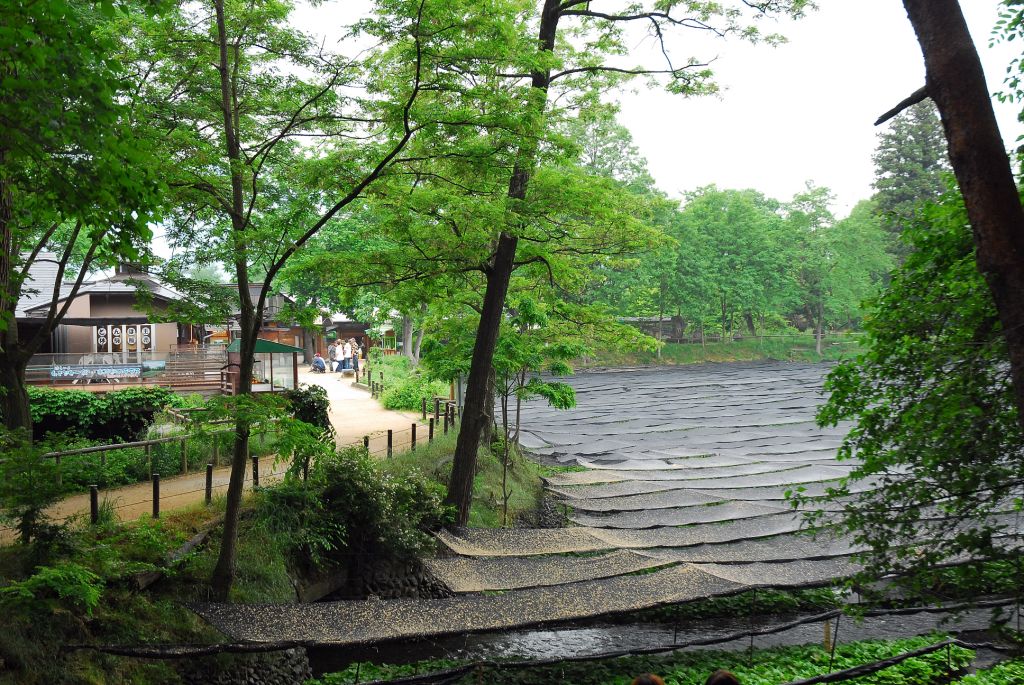 The wasabi cultivation is done in small rows with water streams flowing between them. Small and medium wooden water wheels could be seen here and there in the water bodies throughout this farm. Like in other places of Japan, there are also colorful Koi fishes swimming around. A bridge above the farm gives the opportunity to enjoy the beautiful scenery including the farm and the streams of water with a background created by the beautiful long mountain ranges and greenery below shade. The wasabi plants were covered with black polythene sheets as it is hot now. 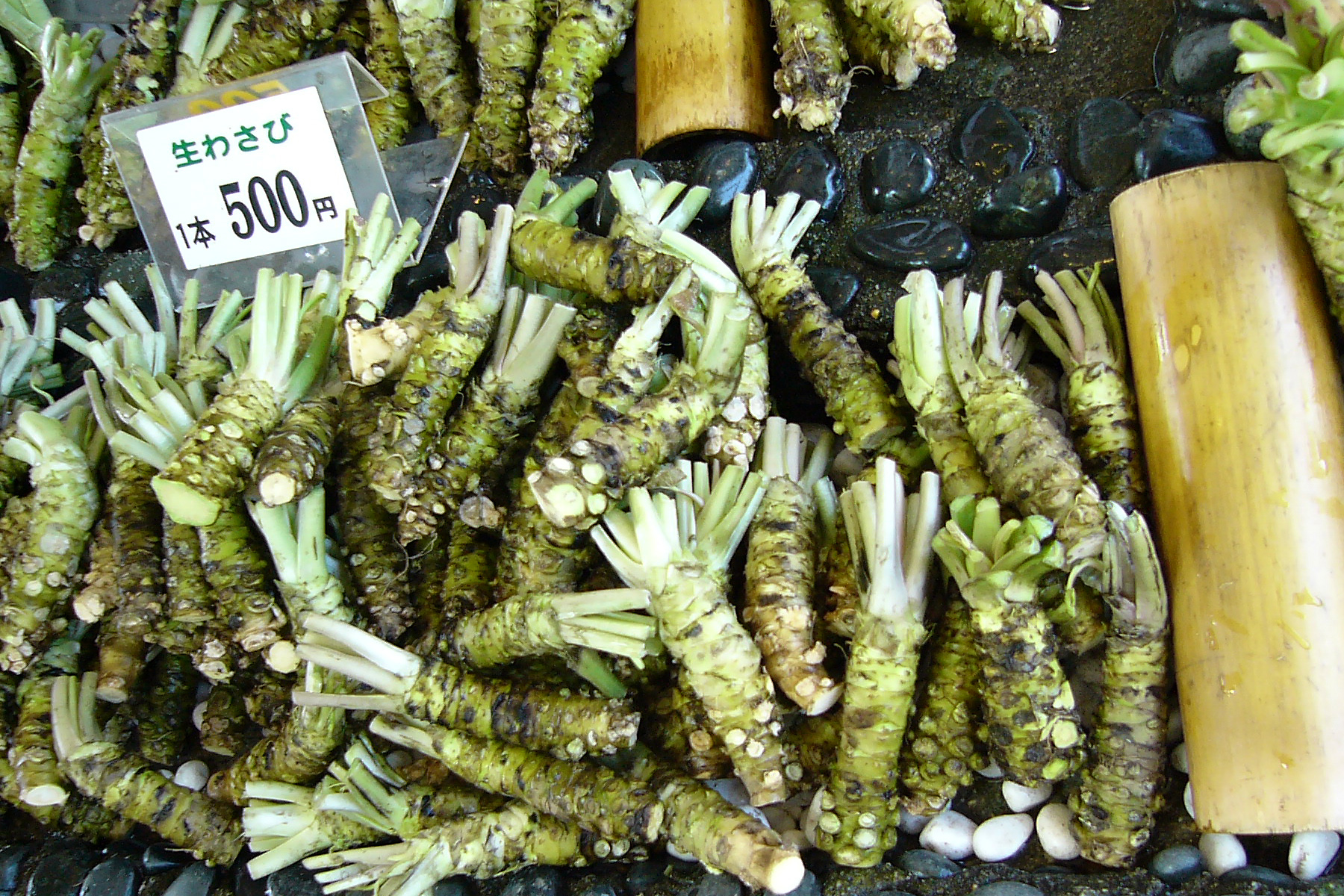 Eventhough this is a village area, it still have many shops around the farm as this place is always visited by people. Most of the shops are selling wasabi related items. There are many wasabi flavored snacks like popcorns, nuts etc. sold here. Fresh wasabi root are seen at the racks of some shops. The most delicious item I could find here is the wasabi ice-cream. There is also Wasabi beer being sold in the shop. 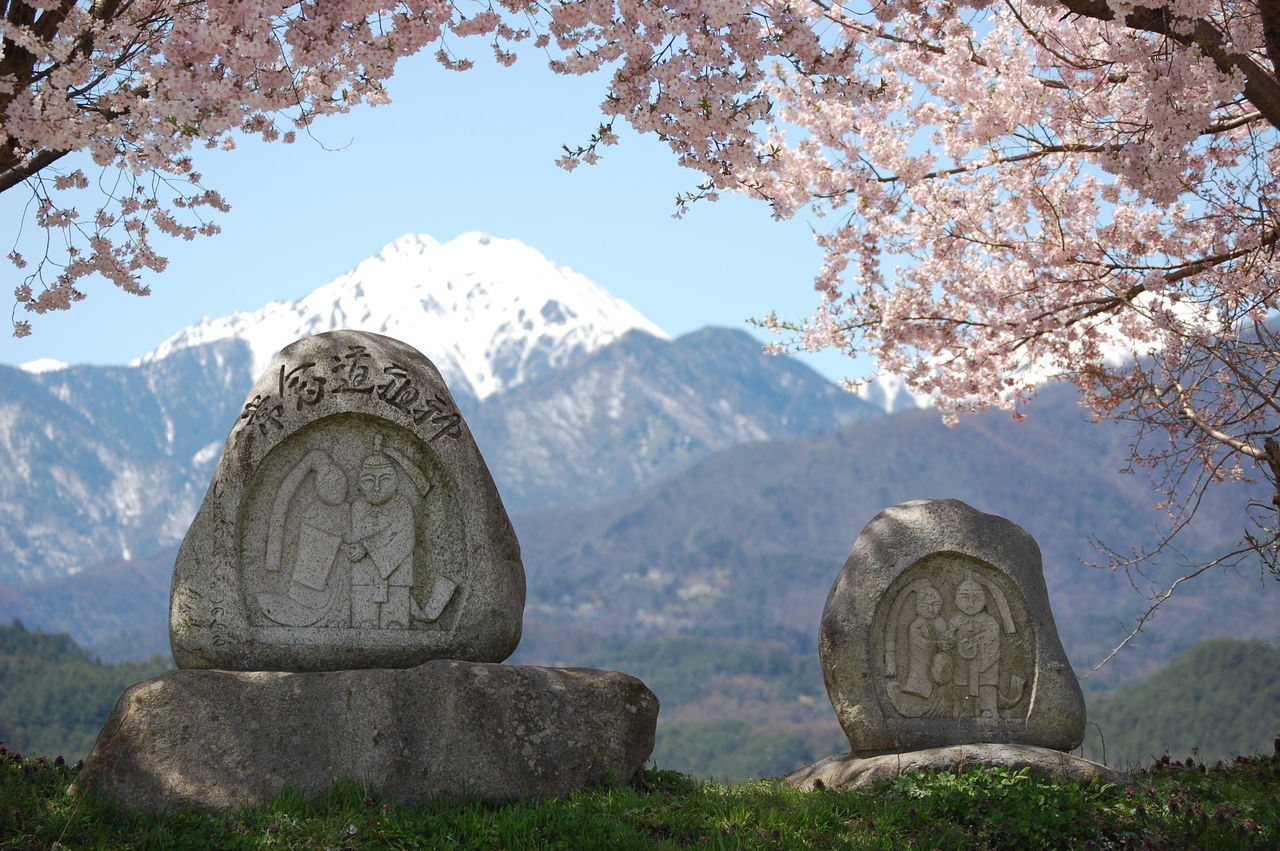 Dousojin are statues that are seen at the border of the villages to protect the place from various disasters. Azumino has a lot of types of statues throughout its small roads. It is said that these statues are placed in the ancient times by some monks who passed through the place with the intension of protecting the travelers and the village from negative forces and beasts. Dousojin statues are found with different pictures and kanji carved inside it. Small and big shaped stone statues are found here in various shapes. These are worshiped for fertility, child birth, safe journey, protection from disasters and evil forces etc. based on which the carvings in it changes. With the beautiful Alps ranges and greenery in the background, these stone statues elevate the beauty of this village area and make our walks interesting. 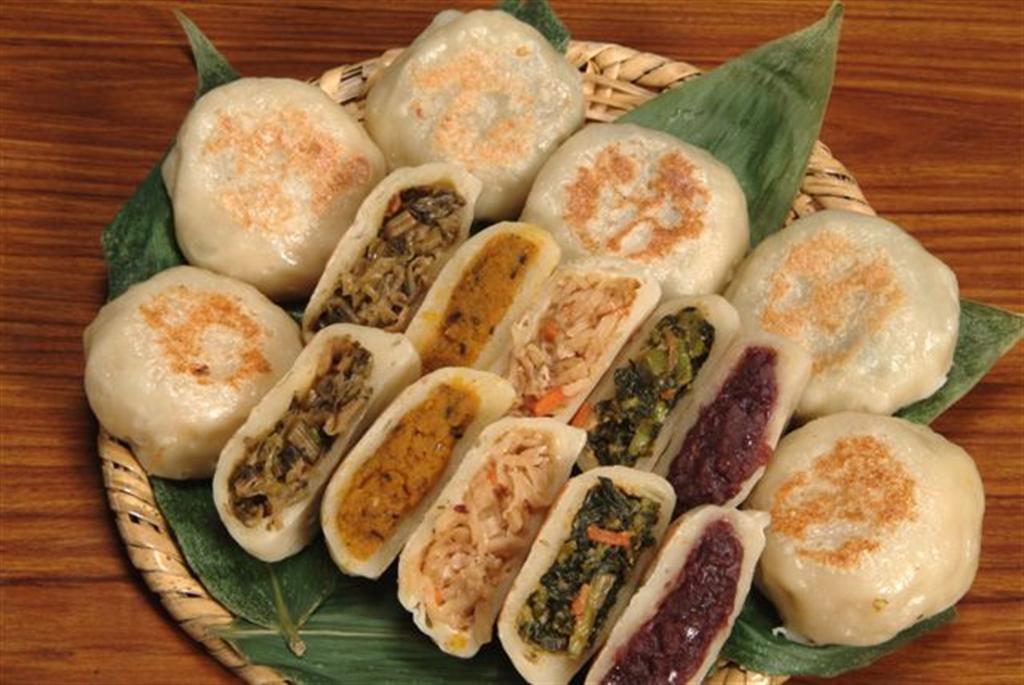 Oyaki is a special snack of Nagano that I enjoyed in Azumino. Small stores selling Oyaki could be seen sold in many small shops of this village. Oyaki is a wheat dumpling, with various fillings inside it like the sweet red bean paste, or vegetables. Many varieties of Oyaki are available in Azumino, but the Nozawana oyaki is the most famous of them. Nozawana are leafy vegetables used for pickling especially found in the Nagano. This pickle is used inside the Oyaki which is the unique taste of this place. There are many places selling Oyaki that are grilled directly in the charcoal. As it is grilled in the primitive way, the taste also is different. Oyaki dumplings are a must try item when visiting Azumino area. 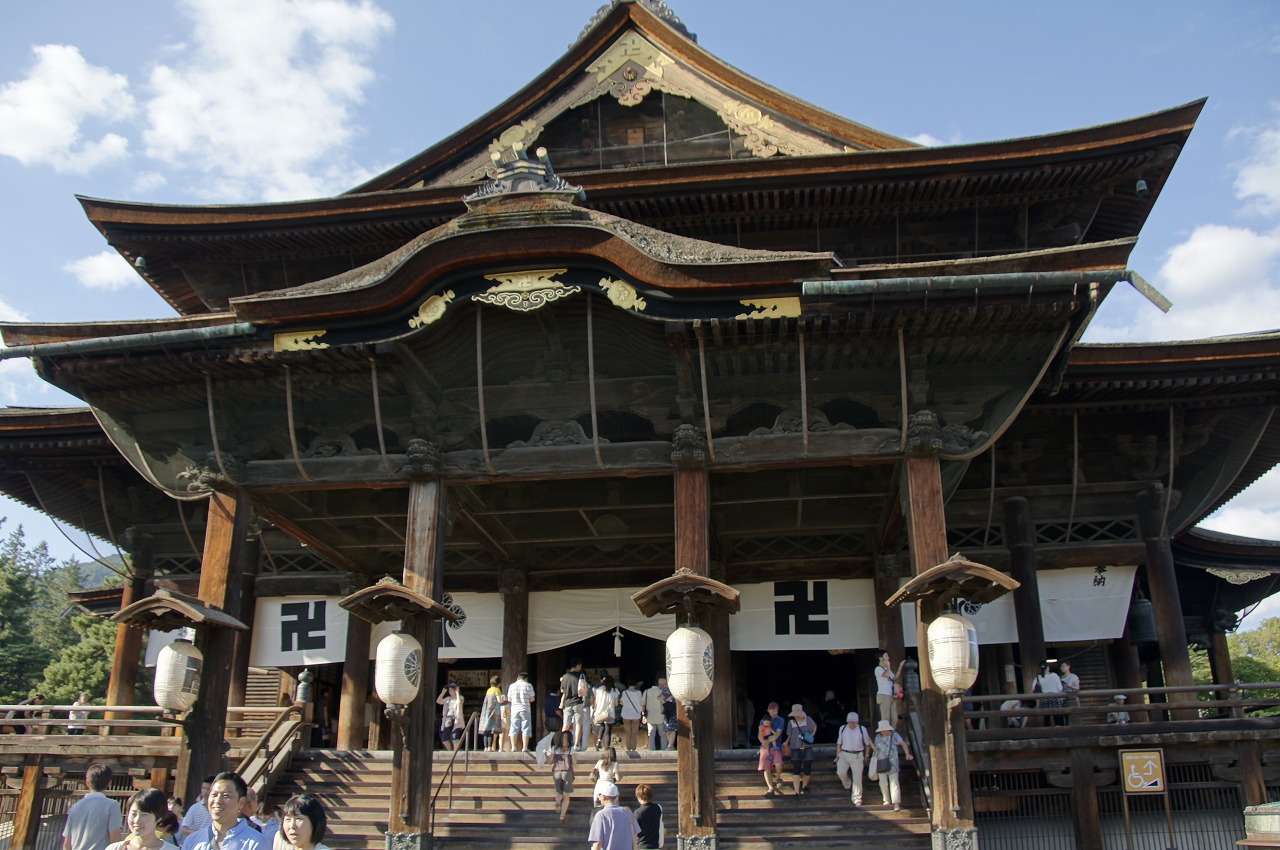 Zenkouji is one of the number one Buddhist pilgrimage sites in Japan situated at Motoyoshi of Nagano. This temple has the most ancient Buddha statue inside it. This statue is not shown before the public at all. Only a replica of this is displayed for some weeks in every six years. Like in all other Buddhist temples, the main entrance gate called the Niomon gate has two guardian deities at its both sides. Crossing this gate is a street extending to the temple with a lot of souvenir shops on both sides. There is a small temple called God of Victory temple at the end of the path. Then we will be moving to the next gate beyond which there is a line of six big Bodhisatva statues named ‘Rokujinzou Bosatsu’ all seated in lotus on one side. They are the gods meant for providing protection against various dangerous forces. There is a museum surrounded with Japanese style gardens and building pillars extending into the water body surrounding it. 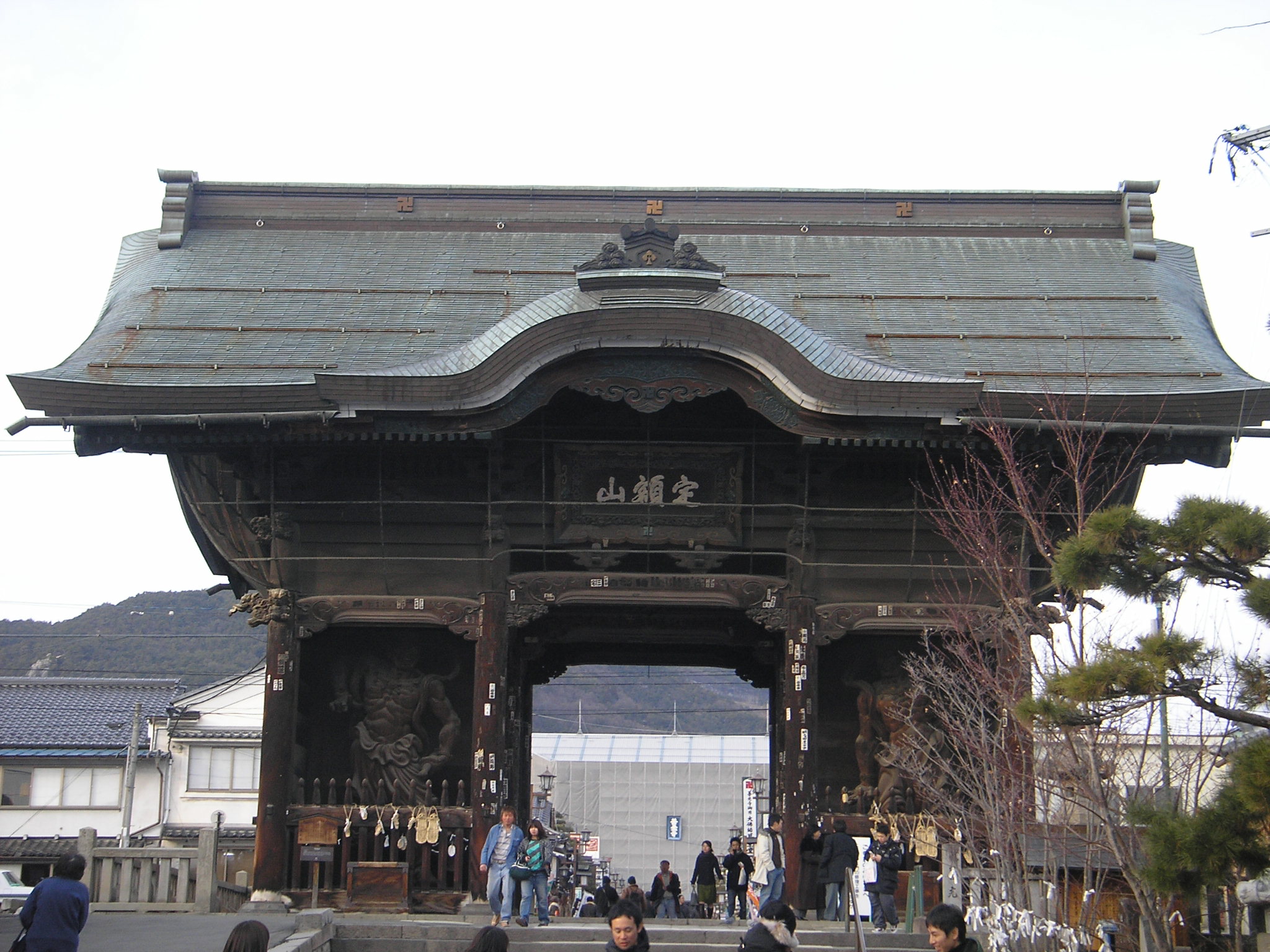 The main hall of the temple is situated behind another huge San Mon gate and is surrounded by the purification trough, the incense burner, pagoda, Kyouzo, bell tower and other structures of a Buddhist temple. The wooden structures of this old temple are really amazing. There are extended Japanese style gardens surrounding the temple area where a lot of lanterns are placed in lines creating a border. The pagoda of this temple is known as the War memorial pagoda and is four storeyed. The bottom floor is opened as a museum of history. There is a statue of Shinran Shonin, the founder of Shin Buddhism. Near to it, there is another statue of Kannonsan, the God of Mercy.

The very famous and important experience in this temple is a walk through a dark tunnel existing underneath the main hall of the temple. Those who wish to enter inside have to take special entry tickets. It is really scary to walk inside it as we couldn’t see anything or anyone around us when walking forward. This path is called as the Path of Enlightenment. We can feel the walls on the side with hands and guide ourselves forward. While touching the wall, we may feel a keyhole and it is behind this door that the actual Buddha statue of this temple is kept. The tunnel will help to find the inner strength of ourselves as we walk alone through the darkness.

Nagano prefecture has a lot of places visited by many people every year, each place has its own peculiarities and unique experiences to make its visitors feel happy and excited.

Pilgrimage to the Tottori Sand Dunes...