One of the most famous sights in all of Japan is the Golden Pavilion at Rokuon-ji in Kyoto.

The easiest way to get to Kinkaku-ji is to hop on a bus. There are several busses that will take you there (I recommend getting a one day bus pass. It’s 500yen, and if you get on a bus three times, it’s more than paid for). Get off at the Kinkaku-ji stop and cross the street for the path leading into the Rokuon-ji area.

Stop just across the street and look up to the right. You’ll see the “大” kanji that they use when they light up the hills in August for Obon celebrations. 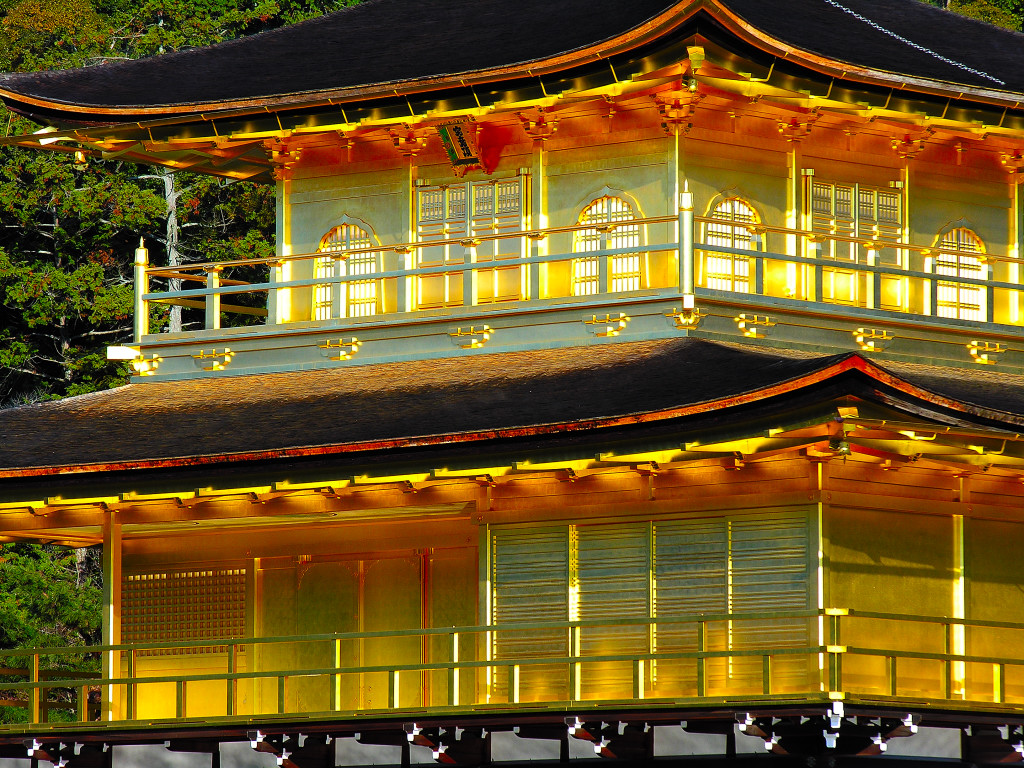 Head down the path flanked by moss-gardens featuring nice, old trees. There are some rather long stone steps to the right, but you want to continue to the left to the ticket area. The admission ticket for Kinkaku-ji is probably the fanciest one you’ll ever get. It’s beautiful with black calligraphy backed by red seals on a large white strip of paper.

Past the ticket area and just around the bend, almost immediately you see it; the golden building on the small lake (because pond doesn’t sound elegant enough here). It’s not very big, really. The levels aren’t very tall and there are only three of them, reaching a total height of 12.5 meters. In the overcast day I saw it, it was a rich golden color, without much sunlight sparkling off the gold-leafed outside.

There are signs ALL OVER that clearly say no cameras. Basically there wasn’t anyone NOT taking a picture and the security guards didn’t care at all. I have no explanation for this. So go trigger happy. Why be the only one following the rules and NOT get a commemorative photo? If you want to try for the classic picture of the pavilion reflected in the water, this is the area to get it. Walking around the lake, you can get closer to the pavilion on the other side, but it’s partially shrouded by elegant pine trees which obscure pictures. 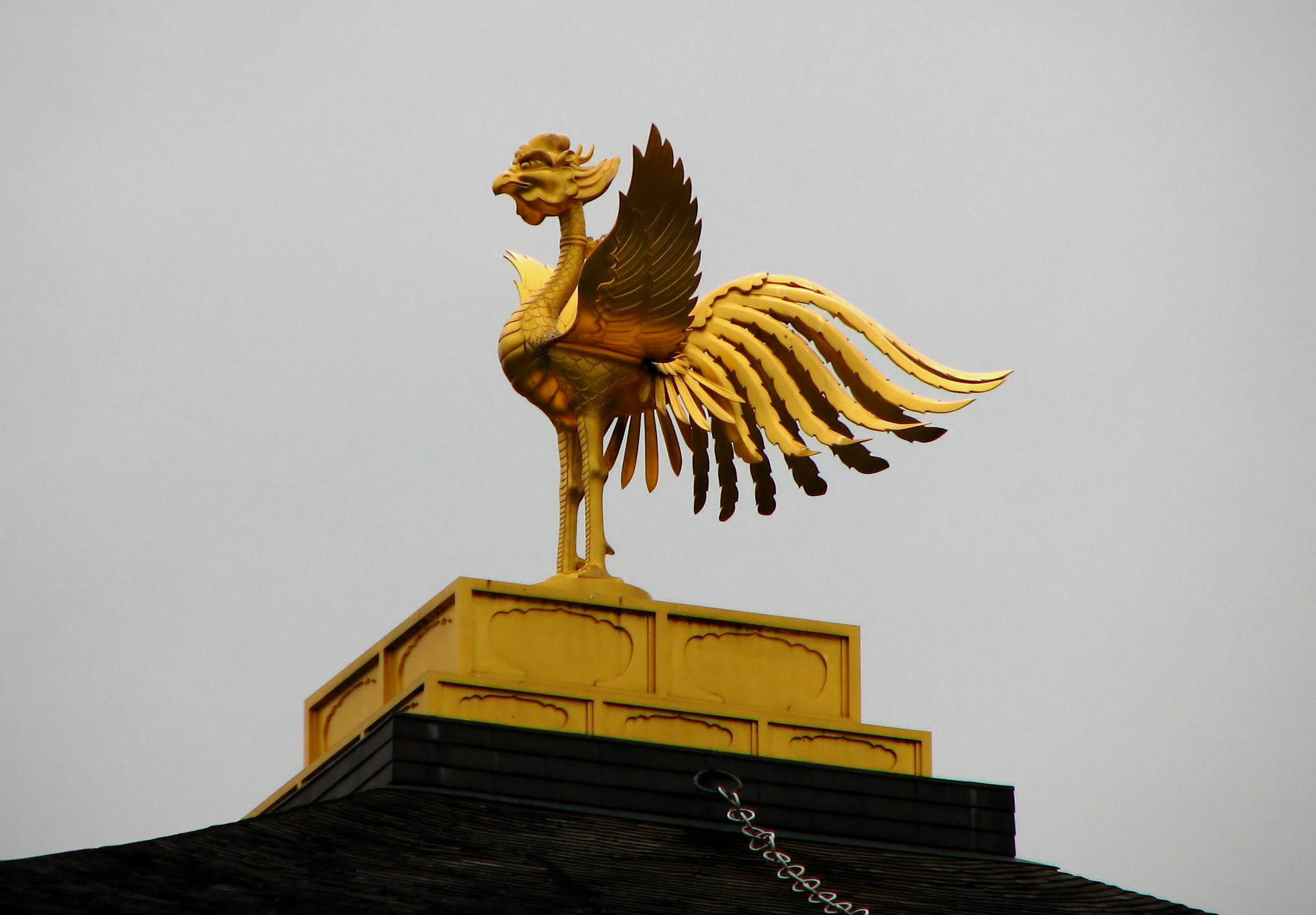 The pavilion itself is, sadly, a reconstruction from the 1950s when it was burned down by a young monk said to be a little off in the head. The ornament on top, ironically, is a phoenix. 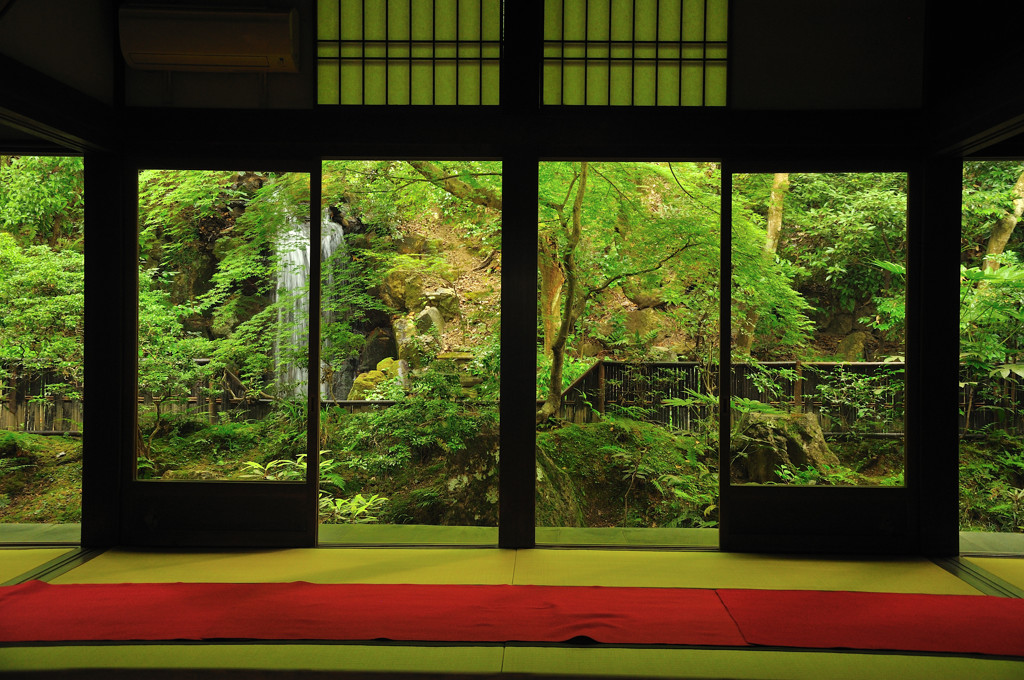 The other attraction is an old teahouse. Unfortunately, this too is a reconstruction. The original 17th century teahouse met with fire in the late 1800s, and the reconstruction took place ten years later. After the glitz of Kinkaku-ji, the teahouse may seem boring, but remember that tea ceremony is supposed to be a humbling and equalizing experience, with the beauty coming from the ceremony itself, not the location in which it is performed. Fans of the ‘wabi-sabi’ aesthetic will like the teahouse with its flaws and imperfections making it charming to see.

For those who couldn’t get that perfect snapshot of the pavilion, there is a gift shop with postcards, photobooks, Hello Kitty phone charms, and tons of other souvenirs to choose from. On the way out, stop and get a drink from the vending machines or get a snack or ice cream from the small shop.