“Always: Sunset on Third Street,” is a Japanese Academy Award winning movie set in 1950s Tokyo. If you are a fan of this movie, you will definitely fall in love with Bungotakada City, which is located in the north of Oita Prefecture. 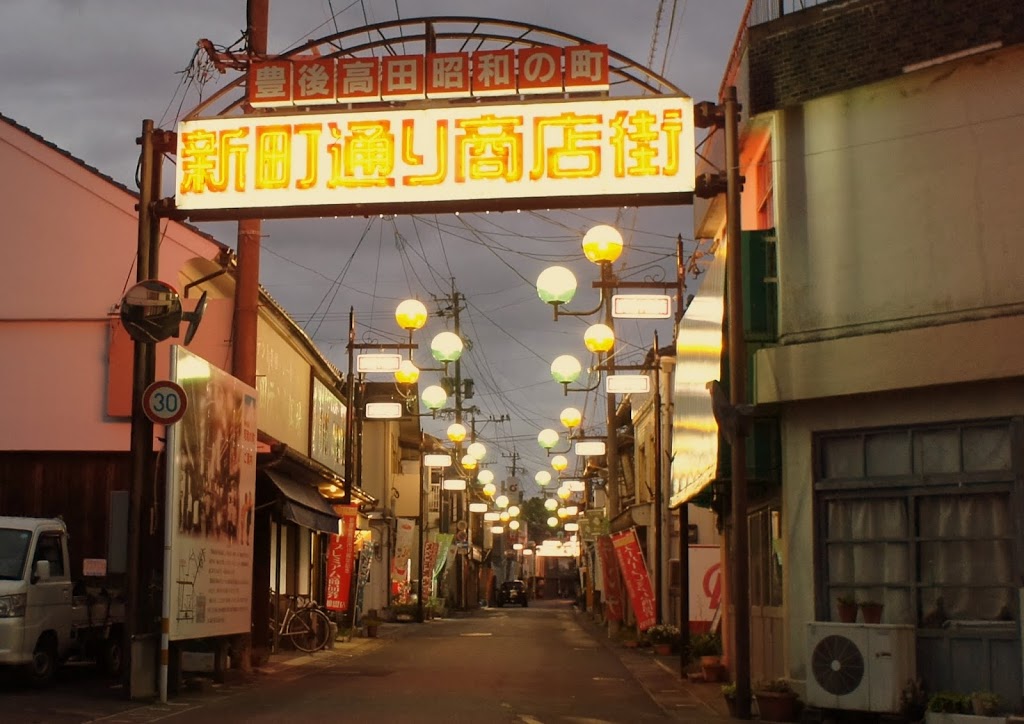 What Kind of City?

Bungotakada City and the surrounding areas (Kunimi-cho, Kunisaki-cho, Aki-machi and Musashi-machi, all in Kunisaki City) were placed under the influence of Usa Jingu Shrine around the 8th century and developed as the shrine’s manor land in the 9th through 12th century. Serving as the hub of marine transportation, these areas enjoyed strong exchanges with the Kansai Area, which was the national capital back then, and was influenced by the capital’s unique religious culture (termed as “Rokugo Momoyama Culture”) where Buddhism and Shinto were blended.

As time progressed toward the modern age and the transportation infrastructure developed in other areas, the present Bungotakada area gradually lost the vigor of old days.

In 2001, a movement occurred to recreate the townscape of the city in the Showa Period, especially that of around 1960s, the time when the city was in its heyday. The movement resulted in the “Showa No Machi (Town of Showa).” The number of officially recognized shops in the town started with only 9 but has since increased to 40.

I have actually visited the area some 5 years ago. It was merely about 550 meters long shopping street surrounded by houses and fields. But the whole shopping street was filled with a very nice retro atmosphere and I was never bored looking around. It was a great attraction amidst otherwise ordinary-looking country setting. 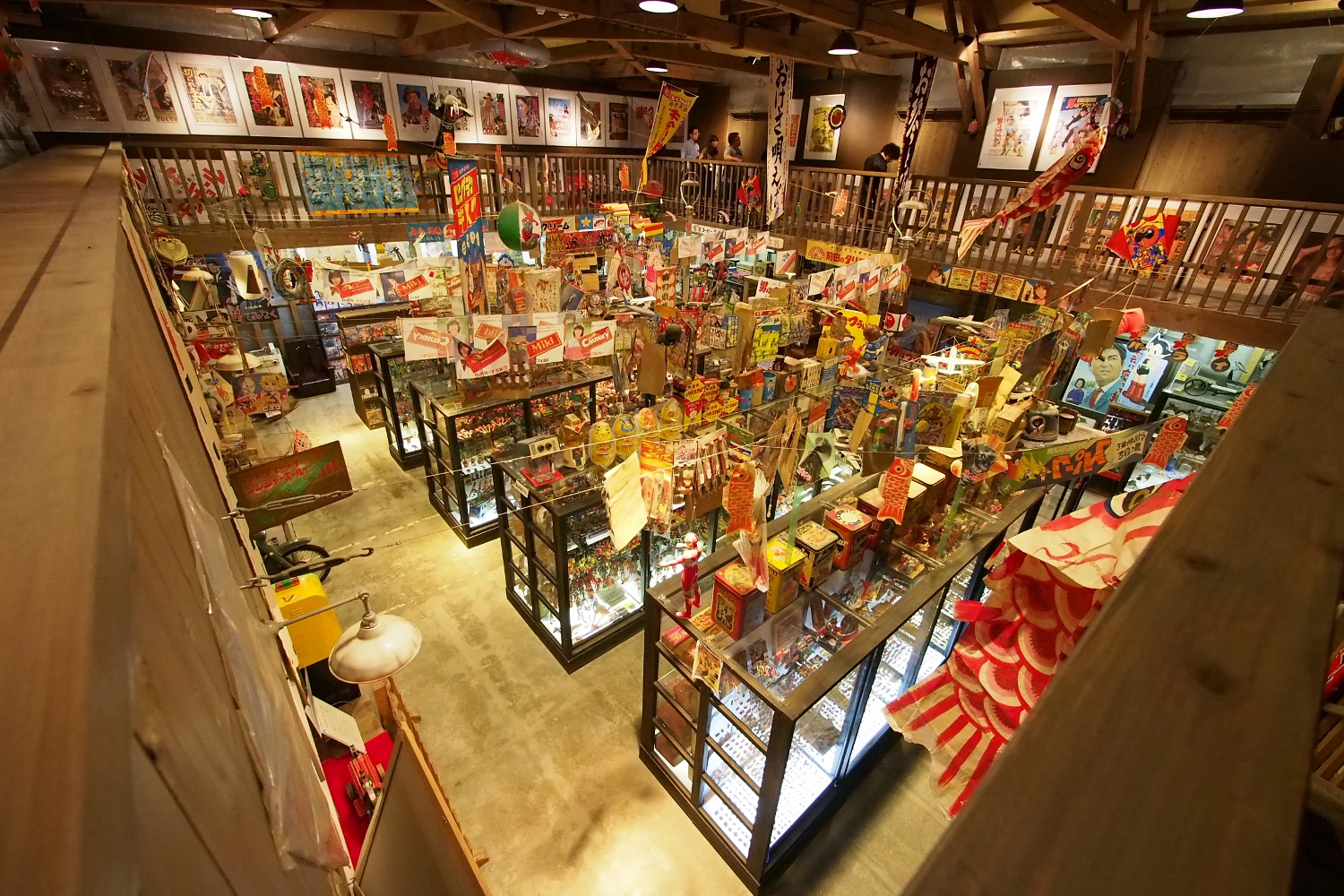 One of my recommendations here is the Yume Museum (Dagashiya No Yume Hakubutsukan). It exhibits about 60 thousand items such as old popular anime figures from the Showa Period and retro masks you would find typically at Japanese summer festivals, all of which will catch the eyes of most avid collectors. 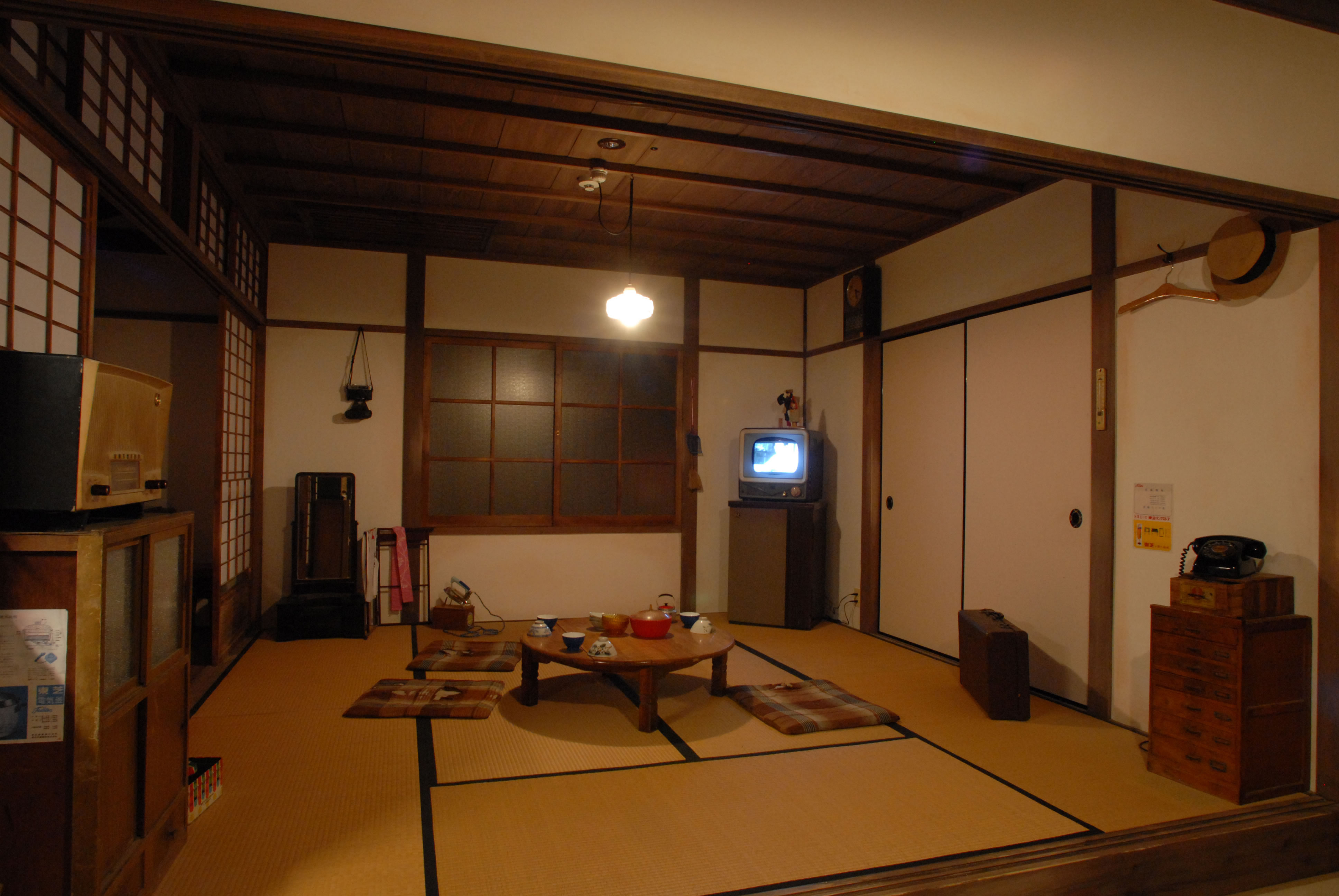 Located adjacent to the museum, Showa Roman Gura recreates an old living space of a typical household from the Showa Period. As you take a look around, you will be surprised by a sudden ringing from an old retro telephone and many other realistic gimmicks. Actually, I picked up the receiver without too much thought of what I was doing but heard no one speaking. Though I am too young to have experienced anything from the old Showa Period, the retro feel of the space felt really nice and somewhat soul-soothing. 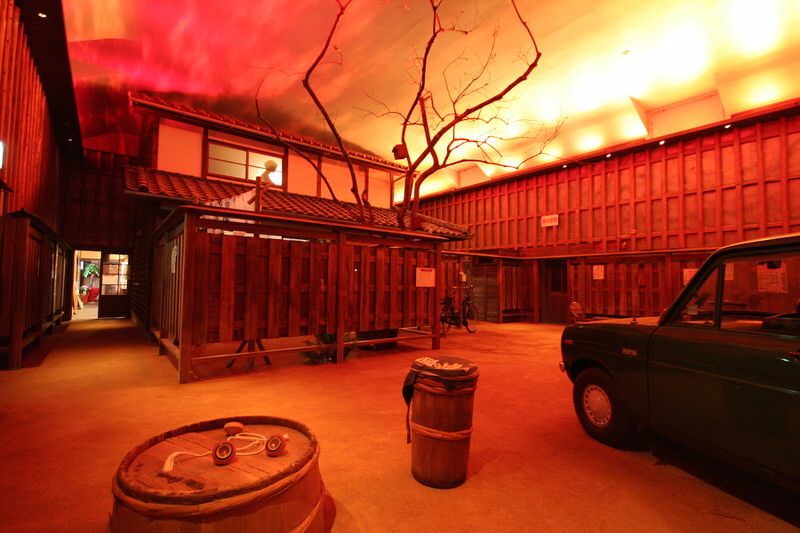 “Showa No Yume Sanchome Kan,” is yet another facility exhibiting the landscapes from the 1960s. Especially impressive was the space recreating a street with some houses. As the illumination fades from bright daylight to the darkness of dusk, the windows of one house to another lit up under the dimming atmosphere, which made me naturally feel like I must get going on my way home.

In this way, the facility impressively evokes the atmosphere of the old days with use of visual and audio effects, which you can rarely experience at any other place.

Take a Break at a Cafe 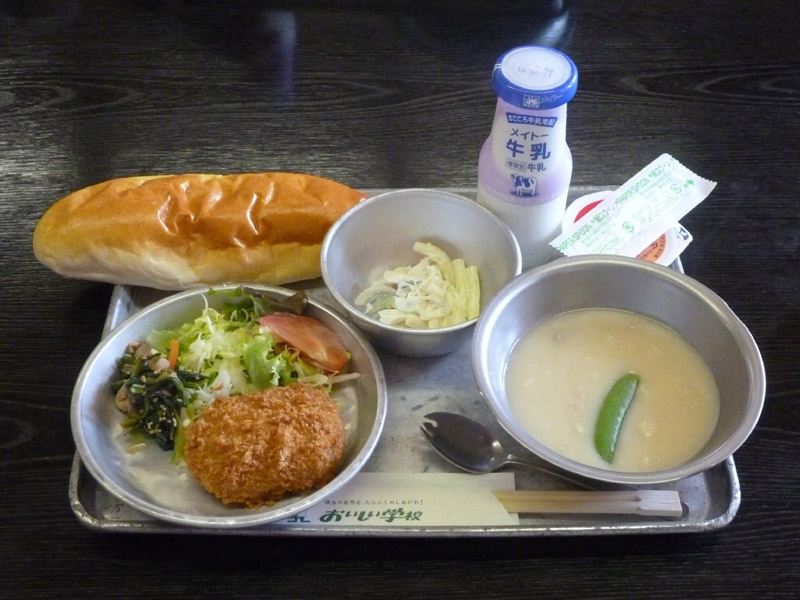 BOULEVARD is an unordinary cafe & bar, which serves old style Japanese school lunches. The aluminum tray you can see in the photo was one of the things very typical to old school lunch in Japan (Kyushoku).

On the tray in the photo is milk, potato salad, fruit punch, deep-fried whale meat and deep-fried bread. 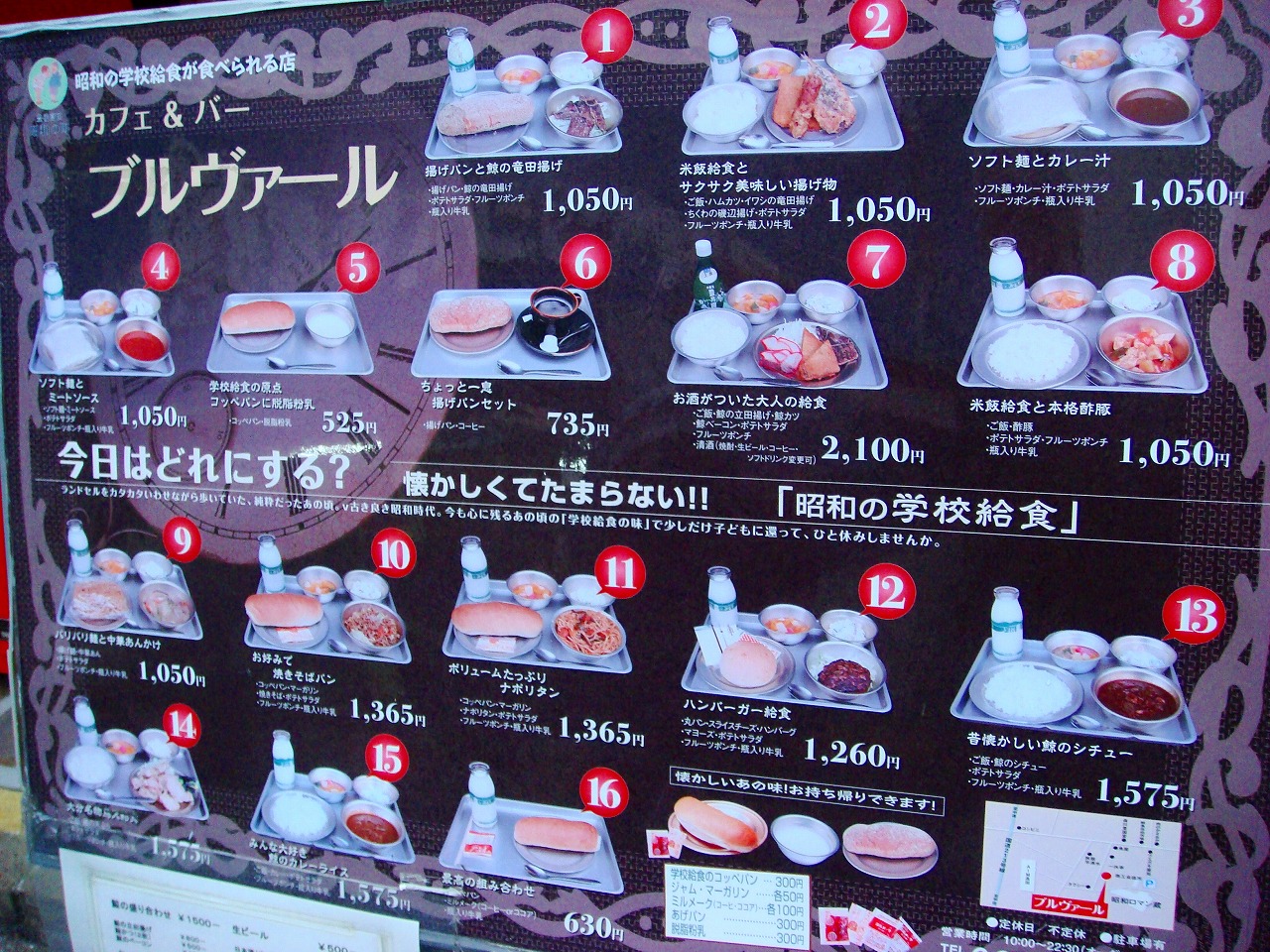 Showa No Machi also features a museum dedicated to old picture books, retro-looking bus service on weekends and many other attractions. So make sure to pay a visit sometime. You will surely be soothed by the laid-back atmosphere and the retro sceneries here.

It is accessible by about 1.5 hour drive from downtown Oita, or 10 minutes by taxi from Usa Station of JR Kyushu, Nippo Honsen Line. If you ever visit the hot spring in Beppu or Yufuin, it will be a great idea to extend your stay for another day to make a side trip to this spot.

Bungotakada City, Oita, is filled with a great retro atmosphere of good old days in Japan, which you can get to experience only by actually visiting the place. It is definitely a must-check out tourist spot.