At Tofukuji Temple the oldest Zen Sanmon gate still stands. Come to Kyoto to learn about the history, the temple’s history, and to view the autumn leaves. 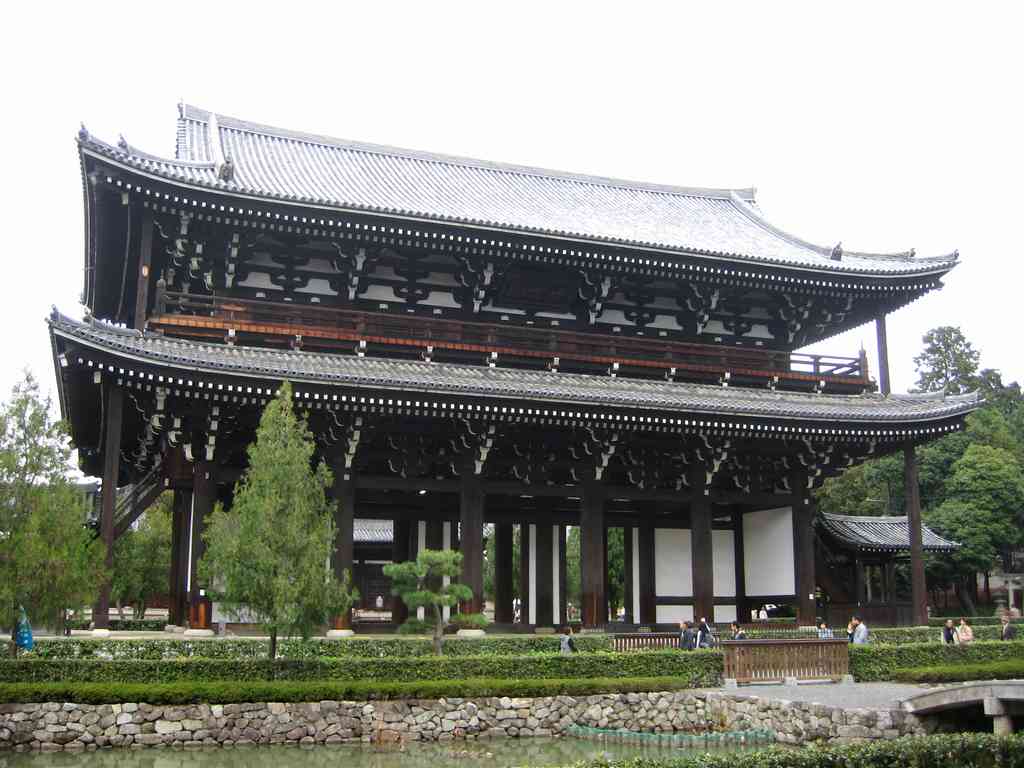 Tofukuji Temple is a Buddhist temple founded by Kujō Michiie, a regent of the Kamakura period. Since he wanted to create a great temple complex in Kyoto, the name of the temple was created by taking “To” from Todaiji temple and “fuku” from Kofukuji temple in Nara. The construction took 19 years from 1236 to 1255. It belongs to the Rinzai sect, and is one of the so-called “Kyoto Gozan”, the five great Zen temples of Kyoto. The first priest was monk Enni, who studied Rinsazi Zen Buddism in China. 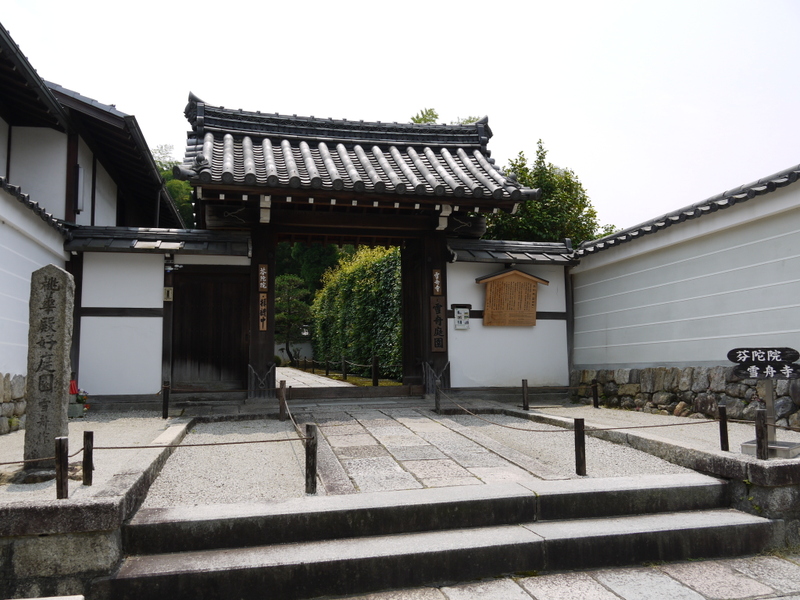 This temple complex has been through fires in 1319, 1334 and 1336, and most of the complex was burnt down. It took about 20 years to reconstruct the complex. It also went through the fire in the Meiji era, but the “Sanmon” or the main gate, escaped from the fire and it stands as the oldest Zen Sanmon gate in Japan and was designated as National Treasure in 1952 even after being reconstructed in 1425. It is 22 meters high with two-stories and is regarded as the most gorgeous gate out of all Zen Buddist temple gates. The “Zen-do” meditation hall, “Tosu” lavatory, and “Yokushitsu” bathing room are also parts of the building that have escaped from the fires until now, and remain the outlook of the early 14th century. The “Hondo” main hall, and the “Hojo” head priest’s building are some of the recent reconstruction. 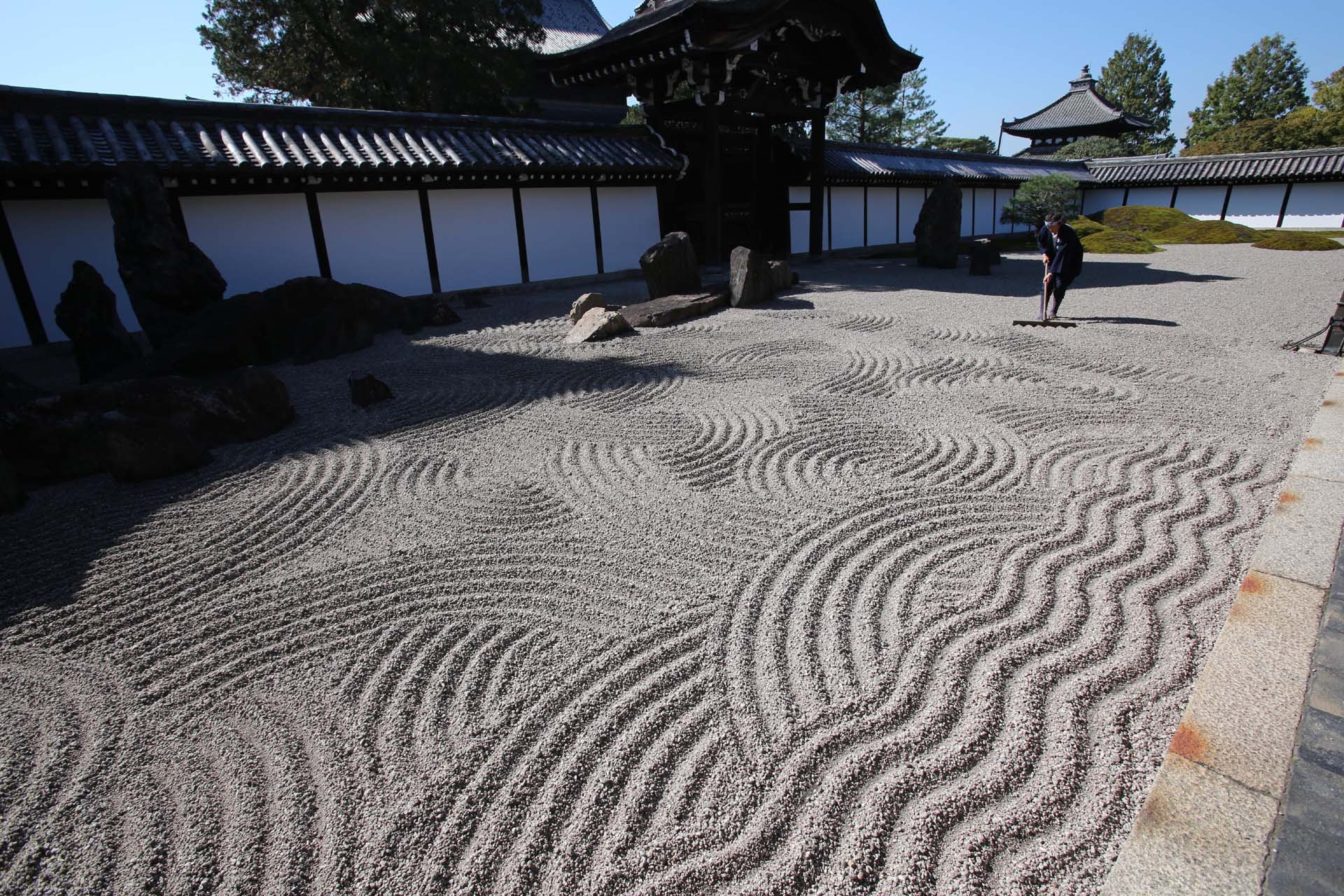 Within the vast area of the precinct, there are many gardens. Four gardens in the east, south, west and north, around the Hojo are called “Hasso no niwa (八相の庭)”, or Hasso garden. It was named after the word “Hasso jodo (八相成道)” that expresses the life of Buddha. The gardens were created in 1939 by Mirei Shigemori, a famous modern Japanese landscape architect and historian of Japanese gardens. 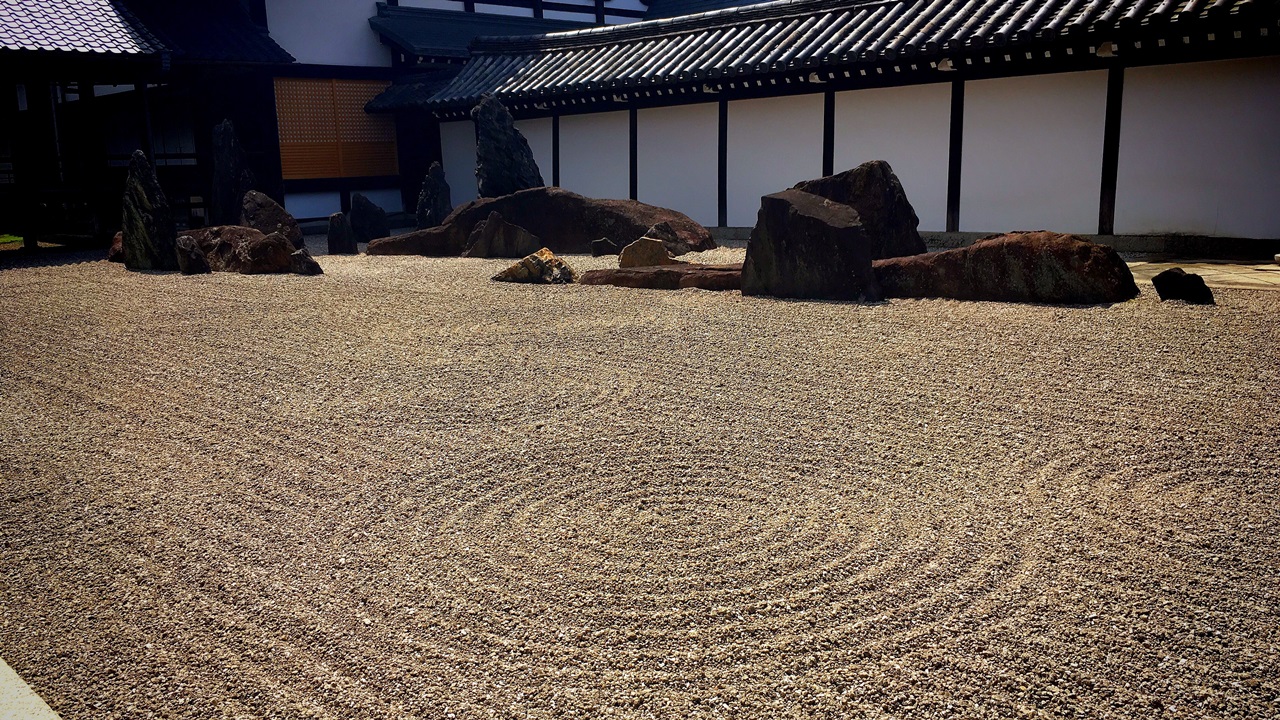 The gardens express the simplicity of Zen. The garden on the east expresses the sky having seven cylindrical stones as the Big Dipper. The cylindrical stones were used as the foundation stones for the the dismantled restroom building. With the reconstruction, it was required not to throw away things because of the Zen belief; nothing should be wasted. The south garden is the largest among the four. This garden expresses the “Elysian Islands”, where mountain hermits are said to live and “Hakkai” or the eight rough seas. This abstract garden is modern art based on the classic garden style. The west garden is composed of checkered patterned azalea shrubs trimmed into squares. This garden also recycles the curbstones that came from dismantled buildings. The north garden has a smaller checkered pattern. This expresses the dying Buddha by showing the bigger checkered pattern in the west garden becoming smaller, disappearing, and going into the world of the west garden; the sky.

THE AUTUMN FOLIAGE IS A MUST SEE 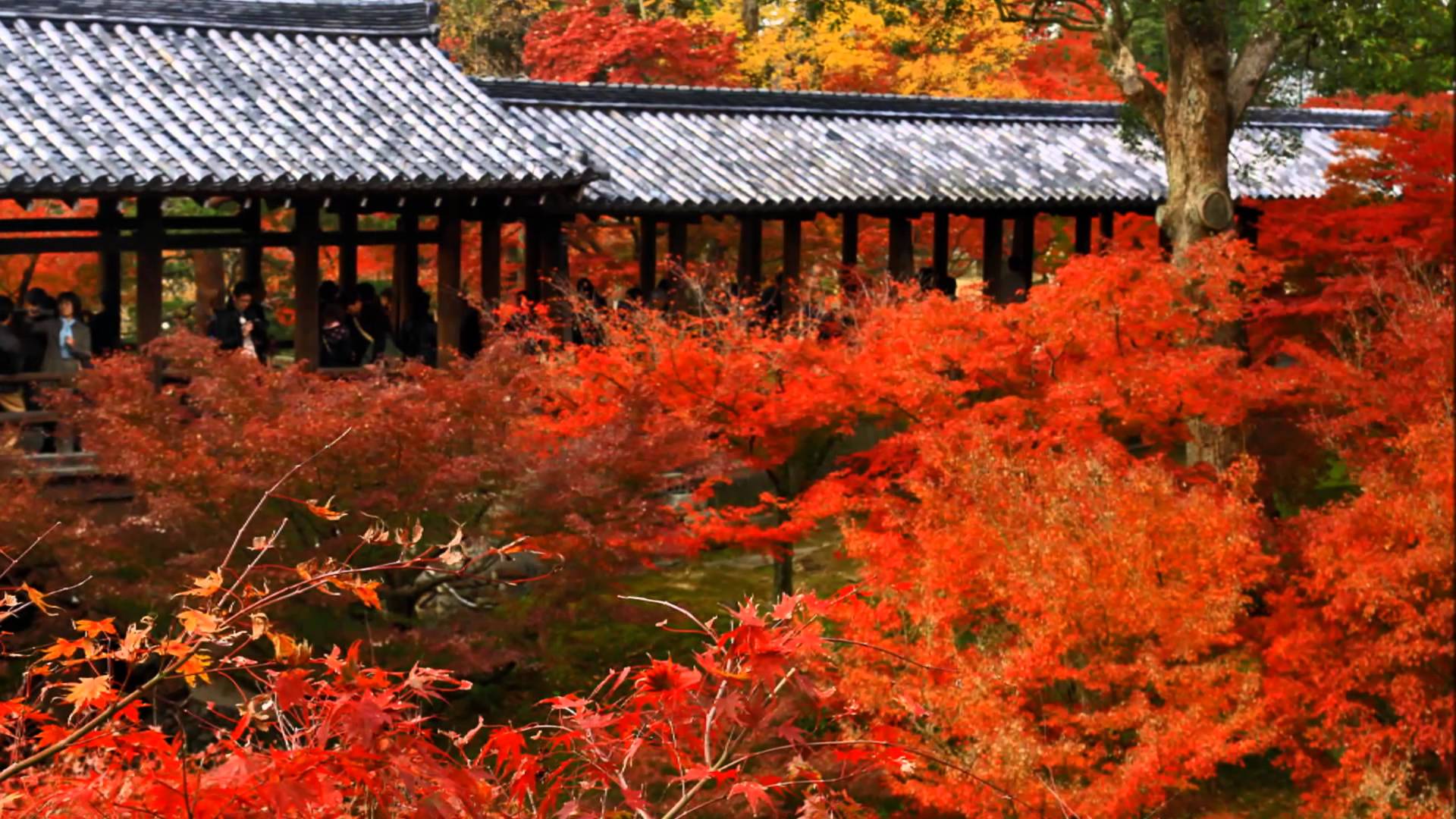 People can enjoy the gardens and historical structures at Tofukuji Temple all year around. However, autumn is the most popular season for to visit this temple because of the autumn foliage. There is a large number of Japanese maple trees. It is just gorgeous and it attracts many people. It is a must see temple in autumn in Kyoto. The bridge Tsutenkyo is the best location to view the foliage. 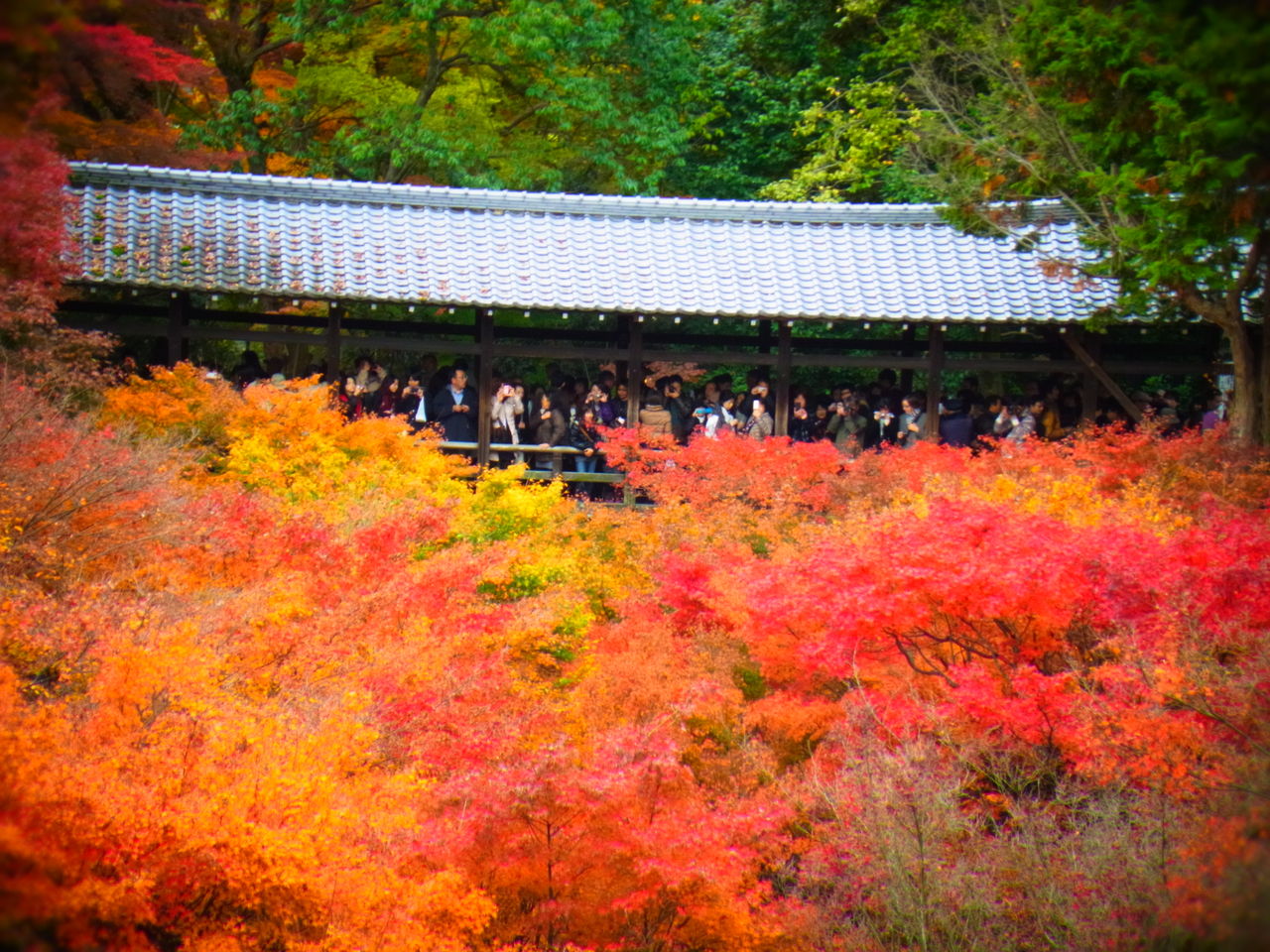 However, it is so famous that on weekends it is extremely crowded and it’s recommended to go there early morning or go on a weekday. Instead of viewing from Tsutenkyo bridge, go to Gaunkyo bridge, which is free and less crowded. From Tsutenkyo, you will be looking down the foliage, and from the Gaunkyo, looking up the foliage.