Finally, it seems the summer heat is beginning to subside here in Japan. Last week, for the first time since early April, I actually felt the need to wear a jacket when I went out for some late night shopping. With the weather now becoming decidedly more clement, some of the leisure activities unavailable to me over the last couple of months have suddenly regained prominence.

With that in mind, I decided a little bit of hiking might be in order.

One of my friends, who lives in Kobe recently told me before that there was rather gentle walking trail to be found behind Shin Kobe station. Since I haven’t done any serious hiking in the past 6 months this seemed like the ideal way to ease myself back into the ways of the hiker. 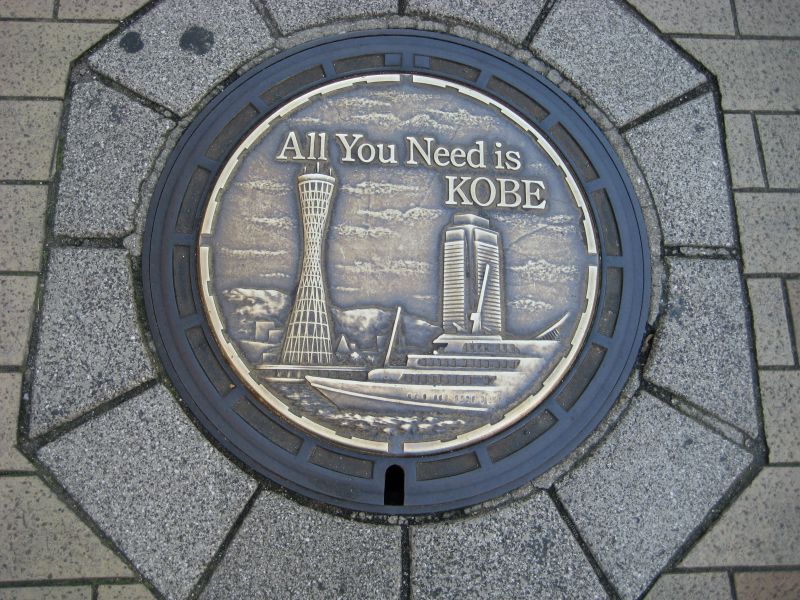 And so it transpired that last weekend I accepted my friend’s invitation and we headed over to Kobe. What I found was as surprising as it was pleasant on the eye.
My companion and I got a bit of a shock on our initial ascent up the trail, beginning at the foot of Mount Rokko. One of the local residents was stubbornly blocking our path.

Of course dear readers, you’re probably thinking, “Well, why not just politely ask him to step aside.”

That’s a pertinent point, to be sure, but there was a slight problem with that idea.

The “local resident” in question was not some elderly Japanese man, it was 40-50 kg wild boar. Imagine, if you will, what Puumba from The Lion King would look like after a vigorous course of anabolic steroids!

We had no choice but to stand back and wait patiently until our long toothed, somewhat moody, new friend decided to head back into the woodlands he calls home.

With our portly little friend safely on his way, we continued up the trail.

We passed a couple of beautiful waterfalls feeding into gorgeous, tranquil mountainside streams as we made our way up the hill.

The birdsong and the noise of insects crawling through the undergrowth was enchanting. It is something of a cliché, but I think it’s fair to say that the entire forest was teeming with life. 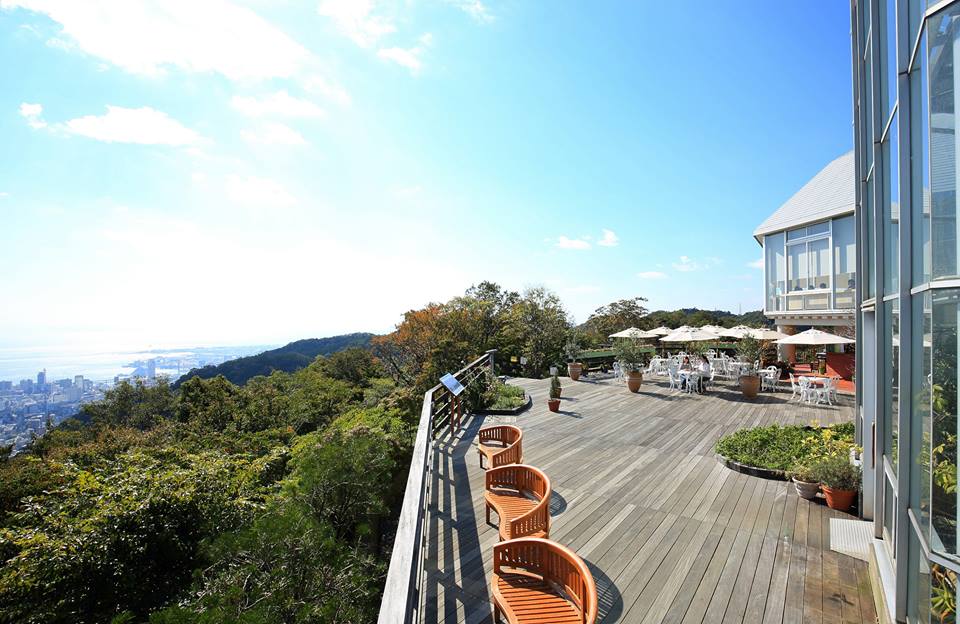 After about 20 minutes or so, we came to one of several outposts along the way. From here, some 500 meters or so above sea level, we could look down and enjoy a stunning panoramic view of all of Kobe City. On an especially clear day one can even see all the way across the bay back to Osaka. I could even point out the Tempozan Ferris Wheel, just a stone’s throw from my house and the nearby World Trade Center tower in Cosmosquare to my friend.
Having hiked for nearly 30 minutes by this point, my friend, who isn’t really much of a hiker was practically pleading for a chance to sit down. And so, we found a nearby bench, grabbed a quick refreshment from one of the strategically placed vending machines and sat back to drink in the view of the stunning skyline in front of us. 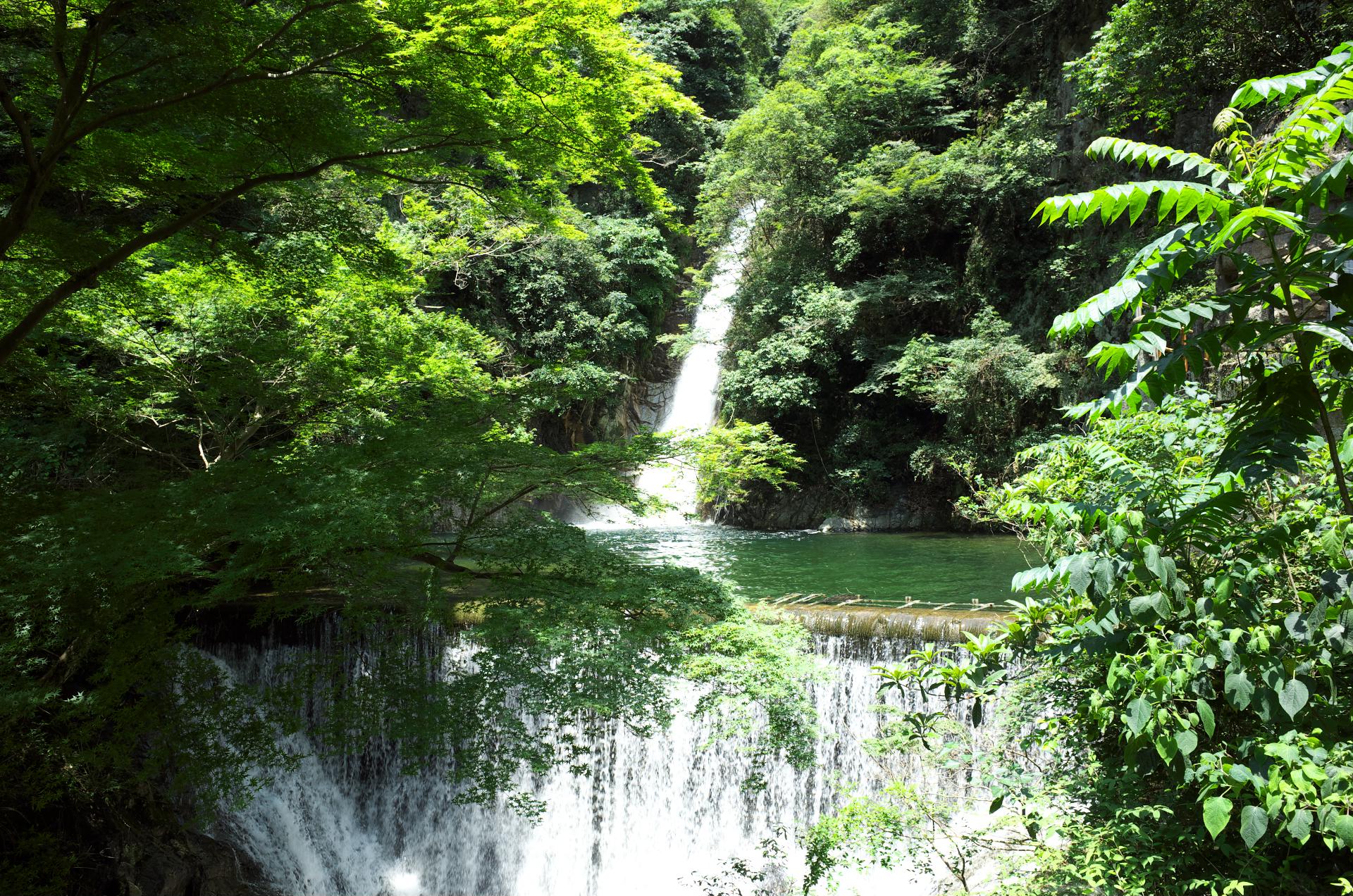 Nearby, about another 10 minutes or so up the hill, we found the reservoir. I’m sure this reservoir probably has some difficult to pronounce Japanese name, but sadly if it does, then it has escaped my memory. It is however one of the region’s major sources of fresh water. Indeed, I was interested to know that a great deal of Kobe City’s drinking water comes from this source. Not only was it a stunning backdrop to the surrounding forests, but even along what is often a busy trail for tourists, given its proximity to the Shinkansen and the relative ease of the trail, it was remarkably quiet and tranquil. Forming a roughly circular shape, the reservoir is surrounded on all sides by a dense, expansive forest. I can only imagine how beautiful this whole landscape must look with a light dusting of snow in winter time. I’ll certainly need to come back for another visit when the time comes. 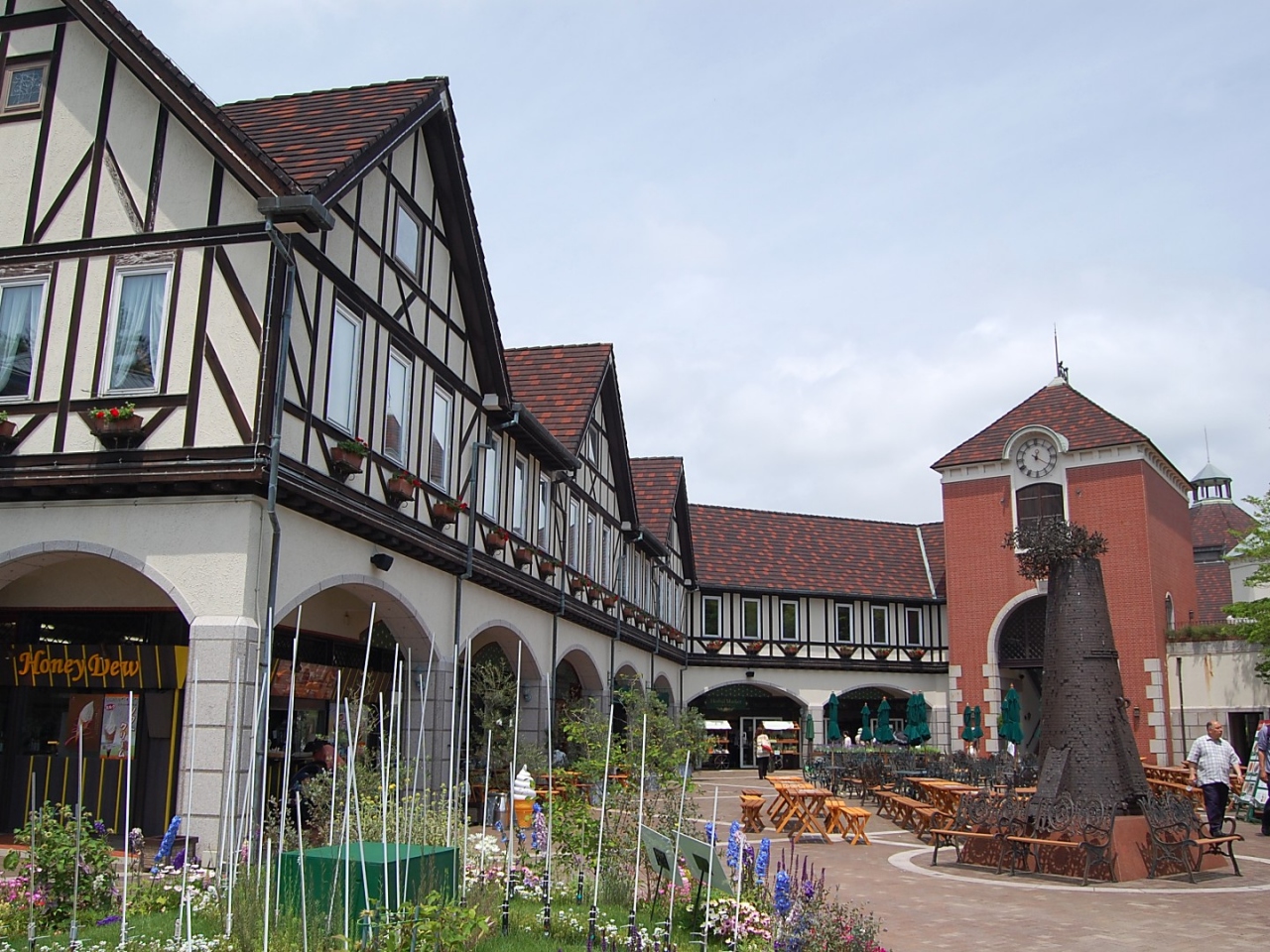 With the reservoir now behind us, we pressed on, to reach the main point of our hike today. Nunobiki Herb Garden. With its German and central European theme, this gorgeous little park at the top of the mountain has a variety of food and drinks on offer, as well as some of the world’s most beautiful and unique flower arrangements. If your feet have suffered a bit of a beating on the way up to the garden, or if you are just feeling like indulging yourself in something a bit different after the hike to the top, there’s a delightful foot onsen waiting to be enjoyed. With the combination of natural herbs and minerals and the crystal clear mountain water, you’ll feel invigorated, renergized and ready to hike up another mountain in no time! 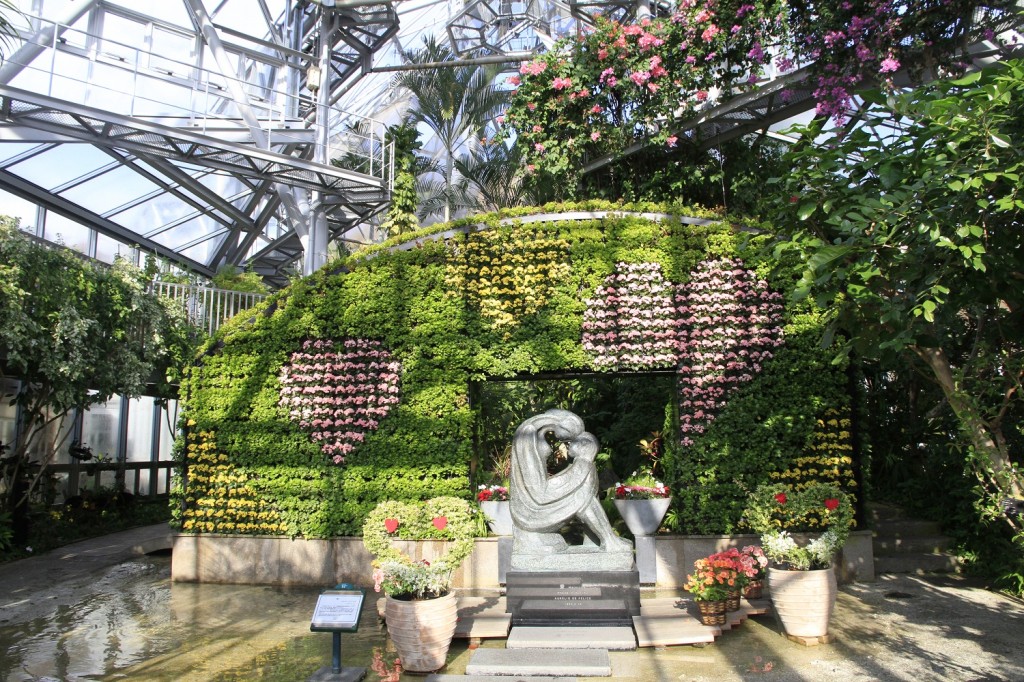 Additionally from the top of the garden there is the obvious added bonus of a breathtaking view of Kobe and its various surrounding islands below.

In keeping with the overall theme of the garden, The bars and eateries at the top of the gardens retain a somewhat Bavarian theme. Tasty German beers, sausages and pretzels are just some of the various delights on offer. 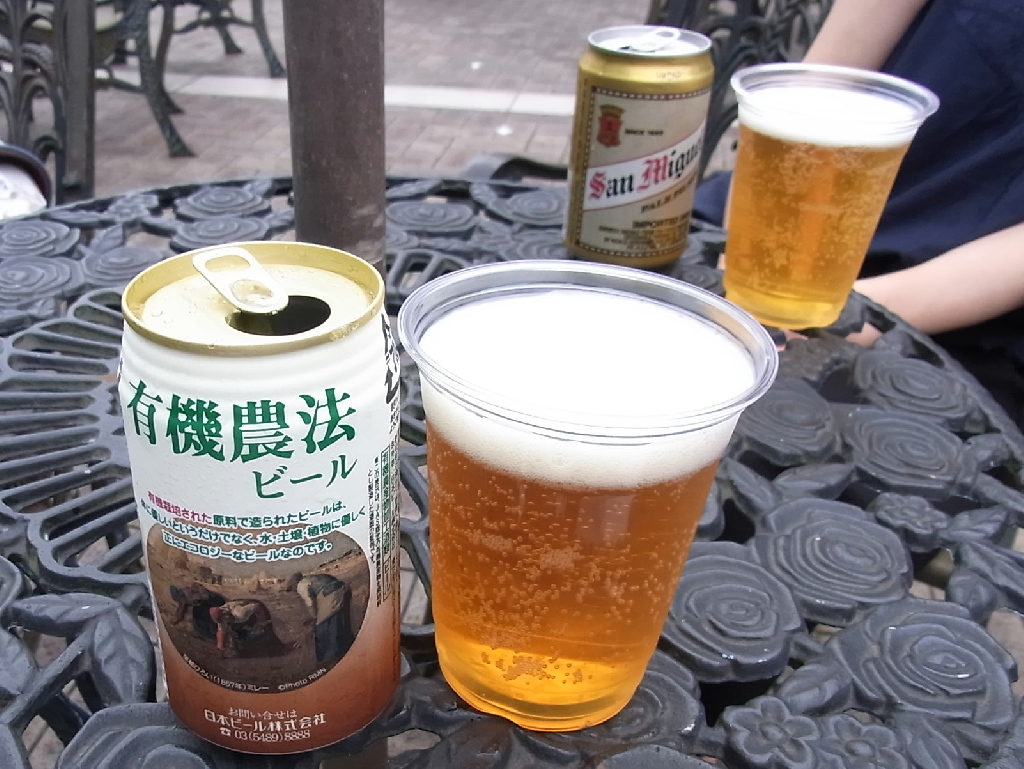 Even if you’re not really the sporty type, Nunobiki Herb Garden is still worth a visit, with easy access provided by way of the ropeway from just behind Shin Kobe Station.
The hiking trail is open until 7pm each day, with the last cable car back to the station leaving at 8pm.

Entry to the gardens is free, with a round trip on the ropeway cable cars costing 1400 yen, or 800 for one way. 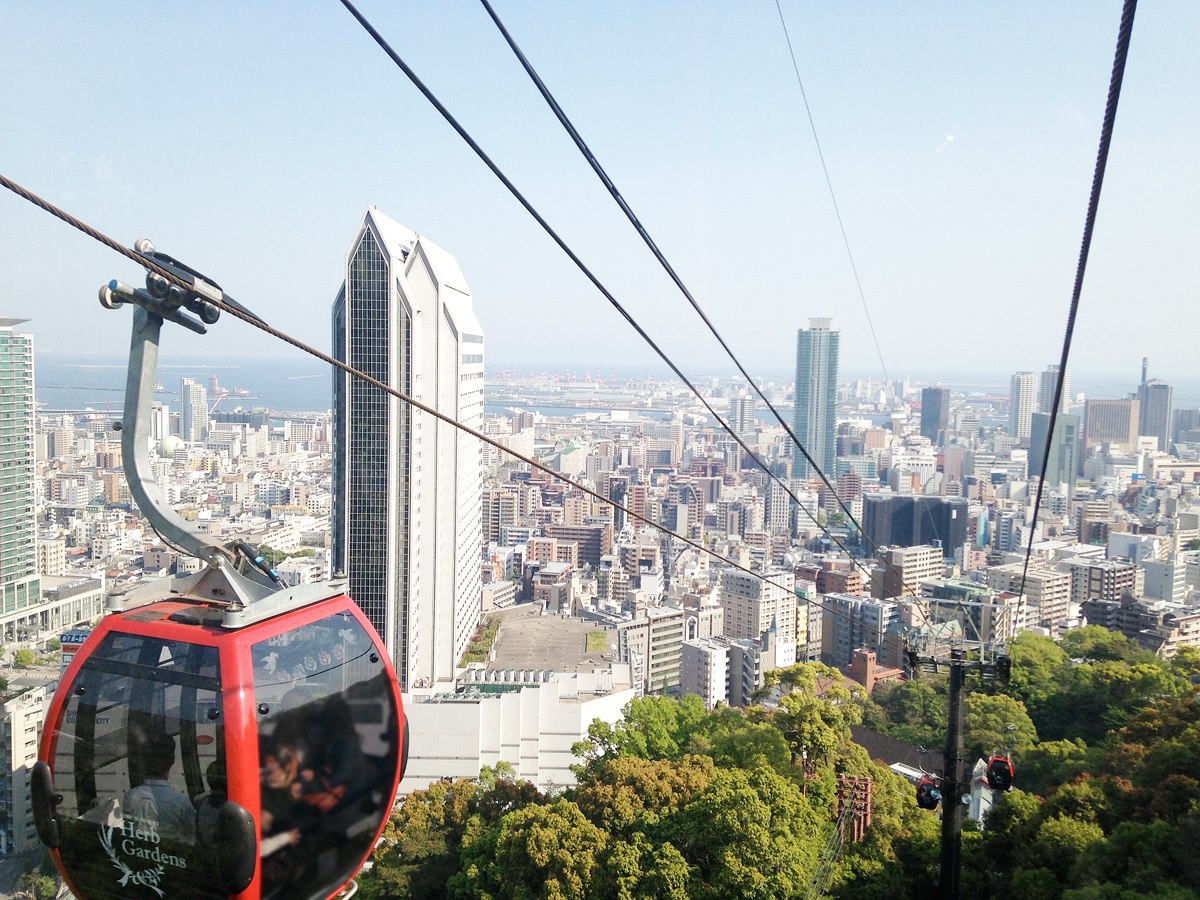 The hiking trail and ropeway ware both within 5 minutes of Shin Kobe station, which is itself only one subway stop, or a brisk 10 minute walk from Sannomiya station.
Whether you’re a seasoned traveller, a couple out on a romantic date, or just someone who loves a good walk, Nunobiki has got you covered!