Japan has a multitude of shrines where various gods are worshiped, and each enshrined deity answers different kinds of prayers. If you plan on paying homage at a shrine, you will have a much better time by doing a little advance research to find out what kind of prayers are heard by the god of that particular shrine.

Within that multitude, the Tenmangū shrines are famous throughout Japan for housing “the patron deity of scholars”. Tenmangū is the general term for shrines dedicated to Sugawara no Michizane, a prominent Heian period aristocrat and scholar.

Kyōto is home to the Kitano Tenmangū shrine, which rivals Fukuoka’s Daizaifu Temmangū shrine in popularity and lineage; its history spans over a thousand years!

Today we will tell you a bit more about Kitano Tenmangū, home of the god of scholars and a popular Kyōto destination.

A Shrine to Appease the Spirit of Michizane

Kitano Tenmangū Shrine was originally constructed to calm the spirit of Michizane. A prominent Kyōto aristocrat in his day, he was falsely charged with a crime and banished to Dazaifu (present-day Dazaifu city in Fukuoka prefecture), where he died in 903.

Following his death, the capital (present-day Kyōto city) was struck by several natural disasters. Fearing that the disasters were “a curse from Michizane,” the people of Kyōto built a shrine to house his spirit, hoping to appease the ghost.

Before long, people’s devotion to the spirit of Michizane rose to the point that the emperor of the time, Emperor Ichijō, awarded Michizane the godly title of Kitano Tenmangū Tenjin. Because of this imperial designation, people still refer to Michizane as “Tenjin” or “Tenjin-sama.”

From a young age Michizane was a diligent student. As a result, worshipers believe that Tenjin is the god of scholars. In modern times, he is regarded as the god of entrance examinations, and there is no end to the crowds of believers who travel to his shrines from far away.

Kitano Tenmangū was built in 1607, and its sanctuary, paved stone path and worship hall are national treasures. The central gate, cloisters, back gate latticework fences, and eastern gate have been designated as important cultural properties.

Next we will introduce the highlights of the shrine.

Highlight 1: The Statue of the Reclining Cow 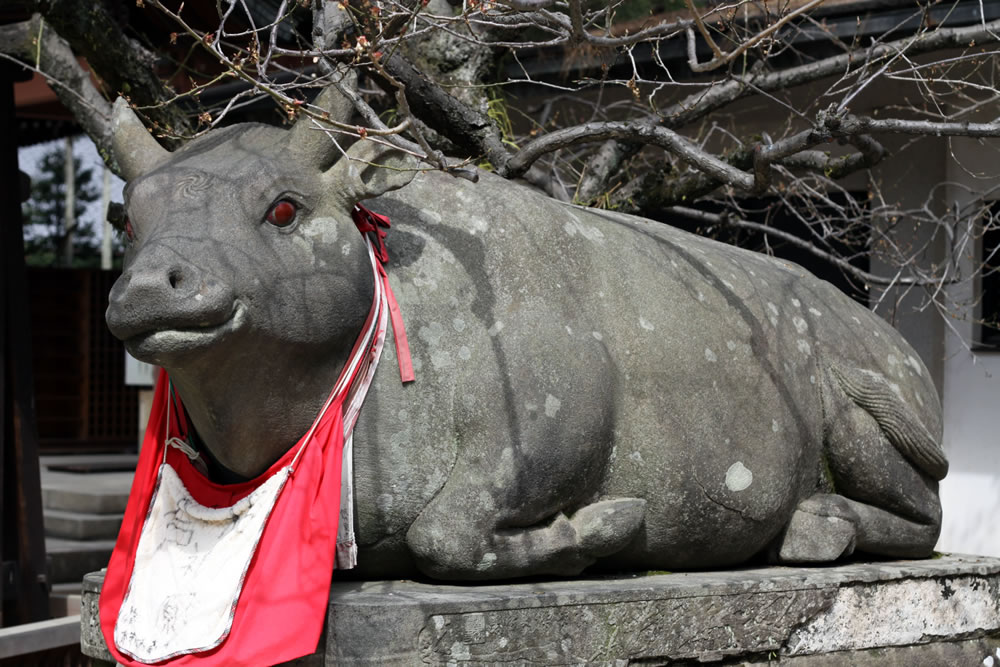 An image of a cow sits on the shrine premises. It is known as the statue of the reclining cow. The statue is indispensable to the Tenmangū shrine.

Many legends about the bond between Michizane and cows still remain: one such story holds that the cows wept as they bade him farewell when he was banished to Dazaifu. As a result, cows came to be thought of as the messengers of Tenjin.

Cow statues can be found at almost all Tenmangū shrines, and it is said that rubbing the head of one of these statues will grant wisdom.

At Kitano Tenmangū, you can see many cow statues, not just one. All of the statues have their own expressions, sizes, and feel different to the touch; why not try finding one to your liking? 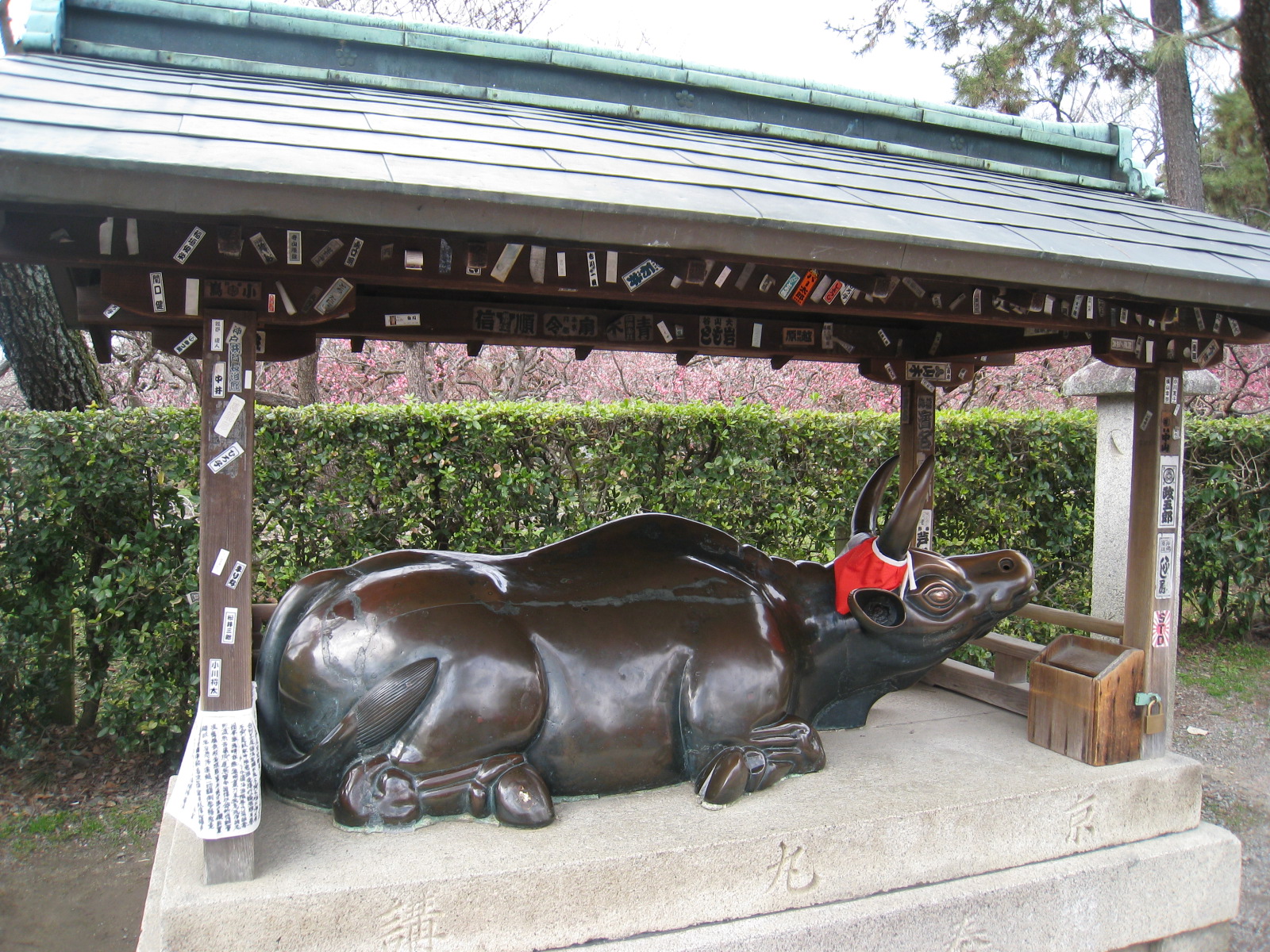 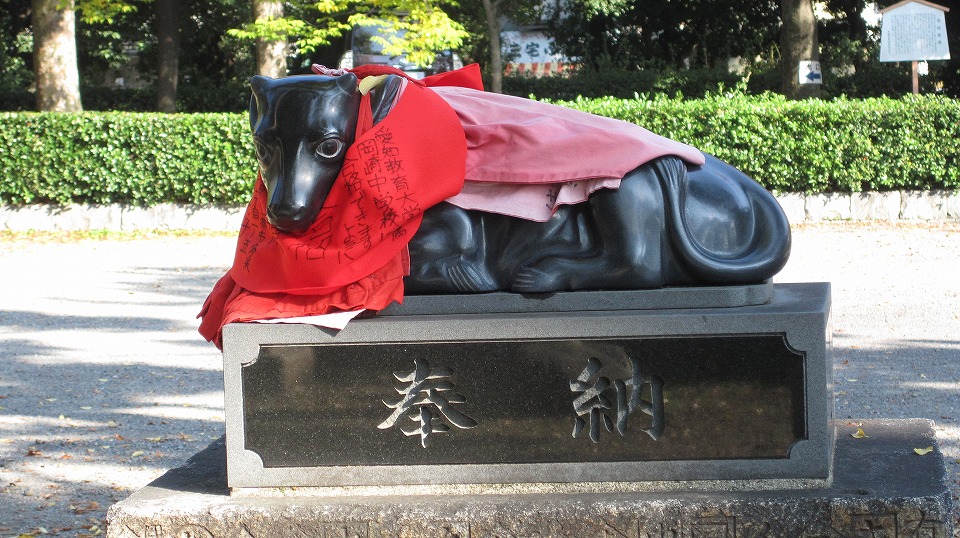 The effects are not limited to the head of the cow alone. It’s also said that if you rub an injured body part, then rub the same part on the cow statue, your condition will improve.

Michizane is said to have loved plum flowers, which are a charming addition to Tenmangū shrine premises. Of course, plenty of plum trees grow at Kitano Tenmangū.

Said to be one of the top places to see plum flowers in all of Japan, the compound contains 1500 plum trees, comprising about 50 different varieties. 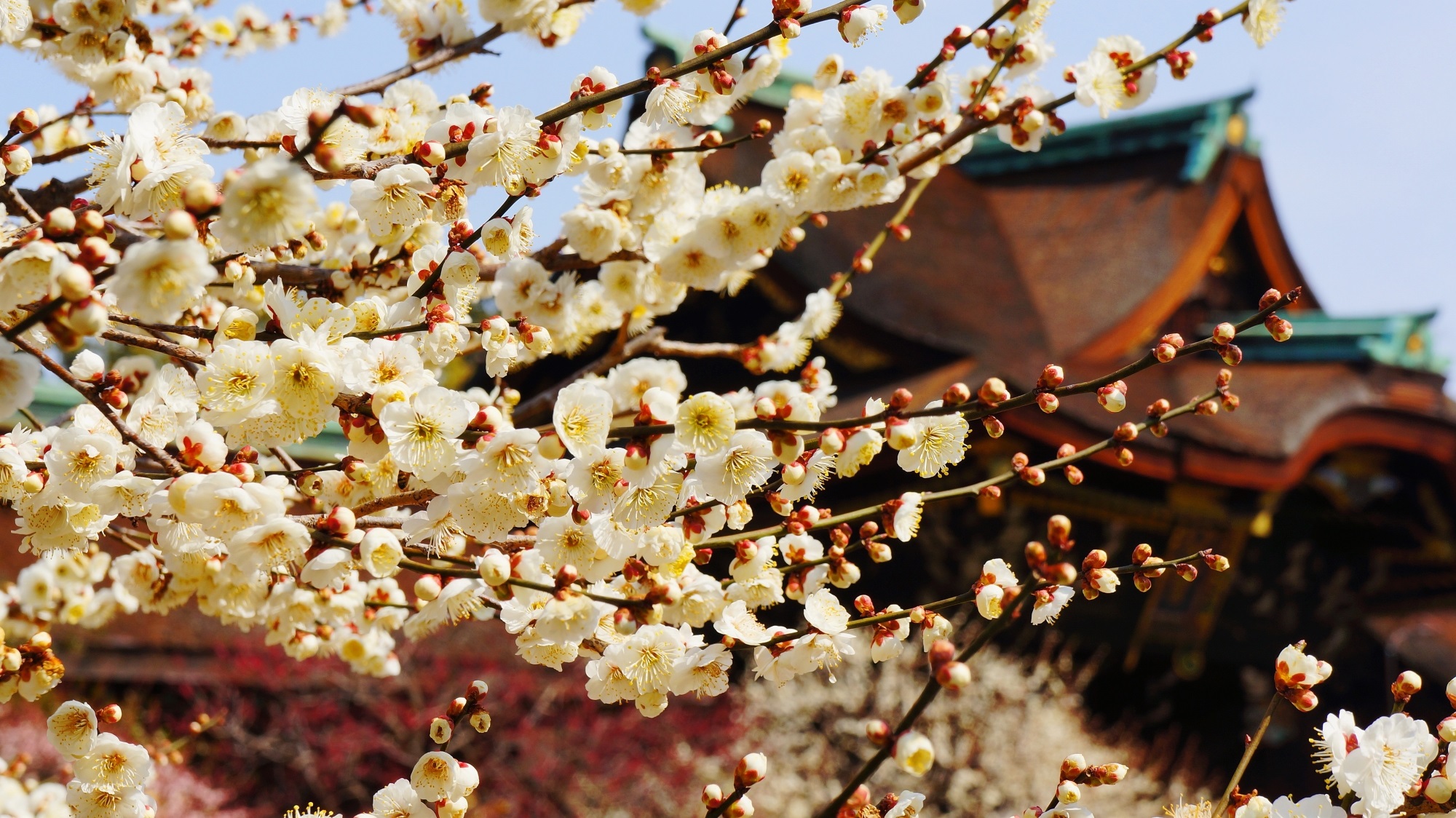 The best time to see the flowers is from early January to late March. In addition, a festival centered around plum flowers is held on February 25th.

No Japanese shrine is complete without charms and omikuji fortune papers. Kitano Tenmangū is no exception, with plenty of divine items related to studying. 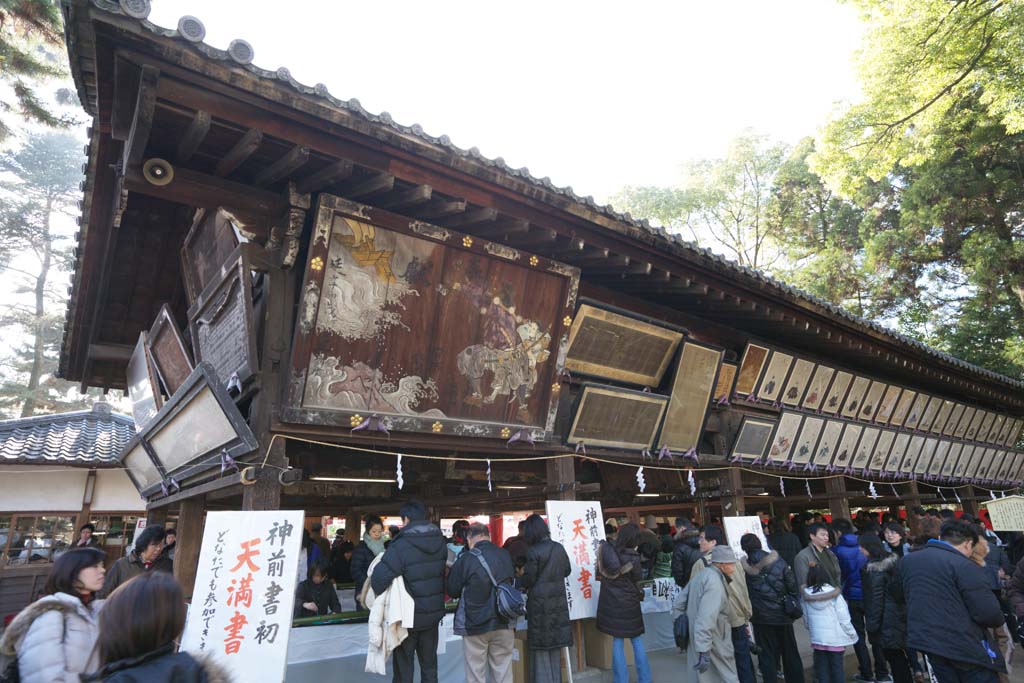 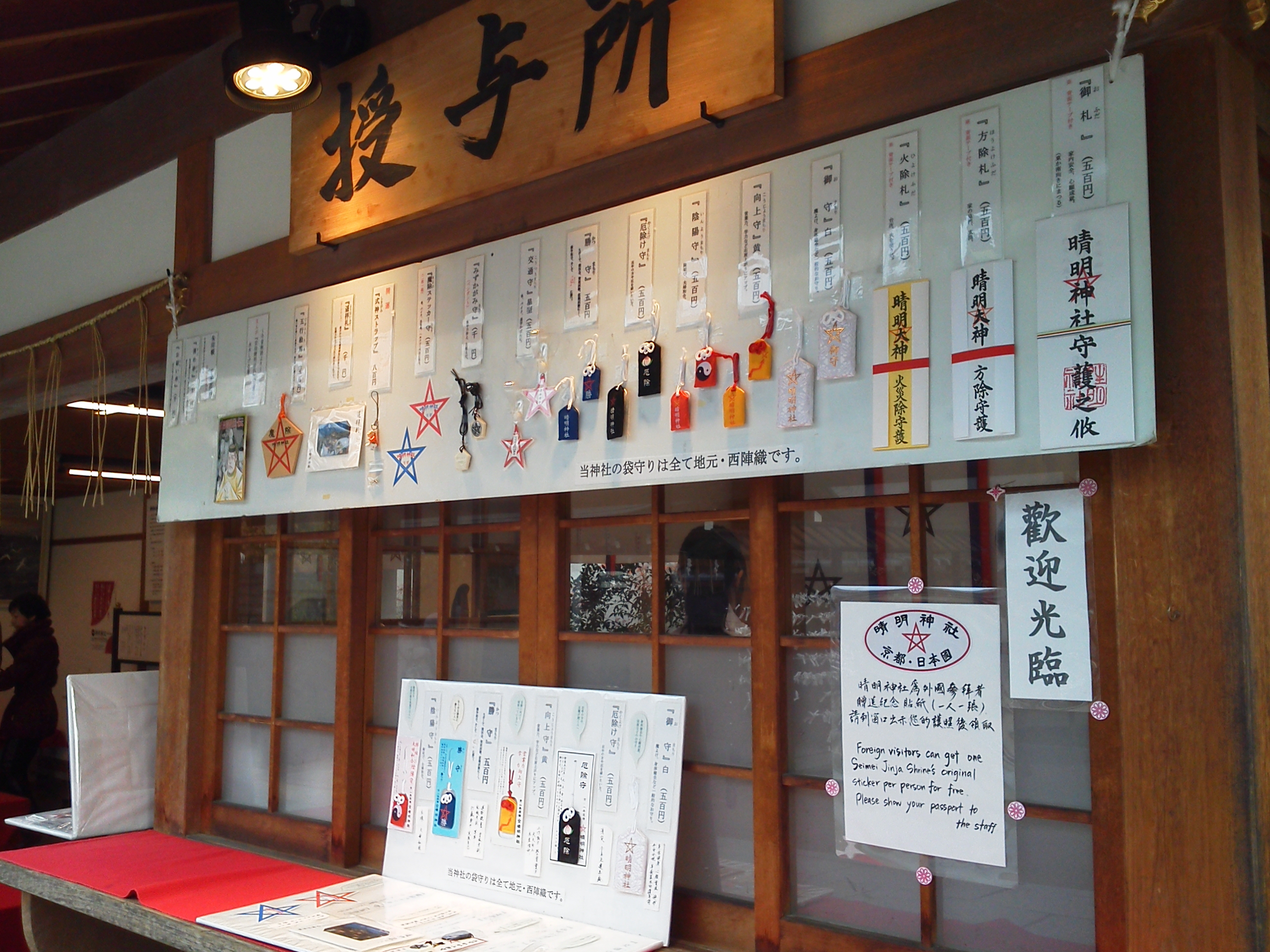 Ema are also an integral part of the shrine-going experience. The dreams written on them are from the many student visitors who are taking entrance exams, hunting for jobs or waiting for tests.

On this day, many students wished for successful test results.

At Kitano Tenmangū Shrine, you can get in touch with real Japanese history.

If you’re in Kyoto and you have a big test coming up, how about stopping by?