A massive painting of Mt. Fuji on the wall at sento in Tokyo. Inari-yu is famous as a filming location for a movie based on the popular comic Thermae Romae. (Inari-yu, Tokyo) ©nifty.com

Japan is home to a wealth of leisure bathing facilities ranging from hot springs to large theme park-like baths. Among these are sento, easily accessible public baths with extremely large bathtubs, which are the face of public bathing in Japan. From the sticky months of summer to the frigid days of winter, sento with their unique architectural designs have popularized a style of public bathing that is the “culture of the general public,” an indispensable part of life in Japan, and one that has been passed down across time to today.

With evening twilight, there is a visible jump in the number of people ducking under the cloth curtain, or noren emblazoned with the word “hot water,” at the sento entrance. Once inside the entrance, they shed their shoes and step up to pay admission at the traditional counter or platform, known as a bandai, where the bath attendant sits. Today many sento facilities have opted to renovate their entrances with more modern counters, but many people still have a special place in their hearts for old-schoolbandai. The entrance fee varies by area but for adults it will run between 300 yen and 450 yen.

Once inside and disrobed, patrons put their clothes in a locker and proceed to the bath. Open the door and you will find a shiny tile floor, high ceilings to keep air circulating, and massive bathtubs filled with hot water. But simply racing to jump in the bath is a no-no. First, etiquette calls for bathers to wash themselves well. Likewise, bathers are not to put their towels in the bathwater, which is why you see many people in the bath with their towels on their heads. 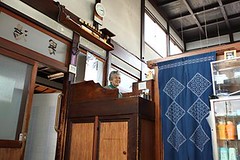 Community baths charging admission for bathing trace their roots back to the first half of the 12th century. At that time, steam baths were the norm. Soaking in hot baths was a practice that first arrived on the scene in modern-day Tokyo during what was called the Edo period (1603-1867). Back then, the city of Edo and its citizens were buffeted by sea breezes carrying sand and dust. These baths were a way for people to clean off the grime each day and no doubt an essential and enjoyable part of each day. 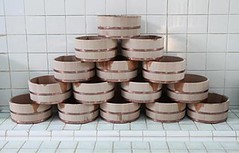 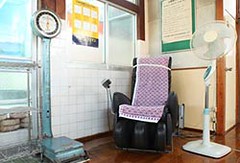 The weathered scale, massage chair and fan have seen their share of action. These are three must-have items for public bath changing rooms. (Inari-yu, Tokyo) ©nifty.com

Across time, public baths have been home to lively conversations in, post-bathing games of shogi (Japanese chess) in the changing room or simply gazing at the scenic view of a garden. Public baths have offered a space for people to relax and do as they like – something that has clearly remained unchanged over hundreds of years.