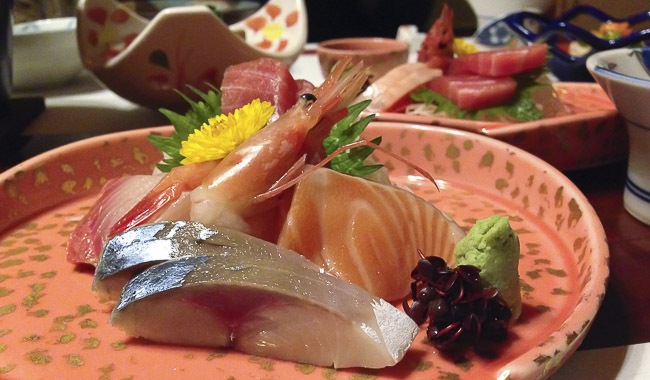 Sashimi (刺身) is thinly sliced, raw food. It is one of the most famous dishes in the Japanese cuisine. Seafood is most commonly eaten as sashimi, but other types of meats (such as beef, horse and deer) and foods (such as yuba tofu skin and konnyaku) can also be served as sashimi. Some people confuse sashimi with sushi. Unlike sashimi, sushi includes vinegared rice.

Sashimi dishes are available at many types of restaurants and at most izakaya. They are also popularly used in teishoku set meals and are a standard element of traditional kaiseki course meals. The slices of raw food are often presented arranged atop of a bed of shredded daikon and garnished with shiso leaves. At some restaurants, the rest of the fish is sometimes presented alongside the sashimi as decoration.

How to eat sashimi

Most types of sashimi are seasoned with soy sauce by dipping each piece into a small dish of soy sauce before eating it. It is usually the diners’ responsibility to fill the small dishes with soy sauce, and it is good manner to pour only as much soy sauce as needed.

Depending on the type of sashimi, a little bit of wasabi or ground ginger may be added to the sashimi piece. This is most elegantly done by dabbing the wasabi or ginger directly onto the pieces of sashimi (as opposed to mixing it into the soy sauce). Some people also enjoy eating the daikon and shiso garnishes; both vegetables have a fresh, minty taste.

The following are some of the more common types of sashimi that travelers are likely to encounter during their trip in Japan. Most of them are available nationwide and year round, except for where noted. 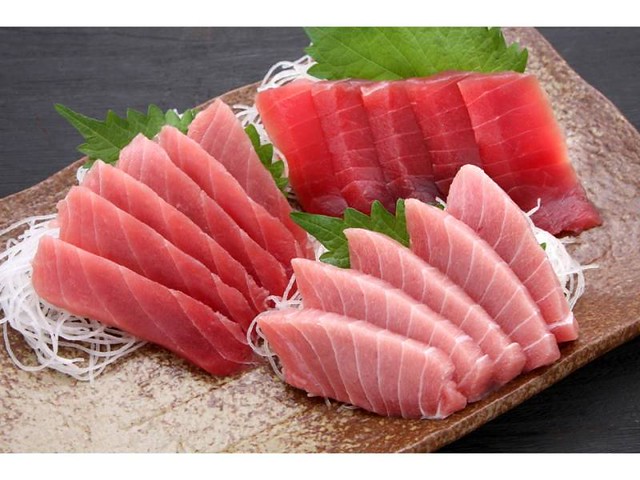 Maguro is found at virtually all restaurants that list sashimi on their menu. Most parts of the fish are eaten. The most common is akami, the deep red loins of the fish which are lean, firm and meaty. Higher up on the scale is toro, the pink, fatty belly meat, which is especially prized for its rich, buttery flavor. Toro usually comes in two grades: chutoro (medium) and otoro (premium) depending on the fat content. Some of the most prized tuna are caught off Cape Oma at the northernmost tip of Aomori Prefecture. 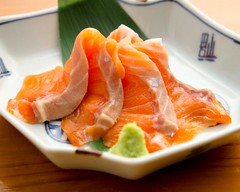 Sake is another fish that is popularly served as sashimi. Its bright orange flesh is tender, fatty and delicious. Sometimes you can find salmon toro on the menu, which – like its tuna counterpart – is the fattier belly portion of the fish. 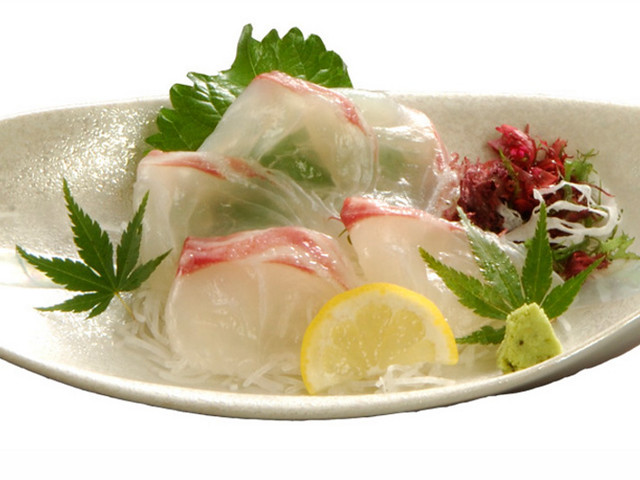 Tai, with its mild, subtle flavor, is considered one of the top white fleshed fish in Japanese cuisine. Tai is often served in times of celebration, such as at weddings and during the New Year. 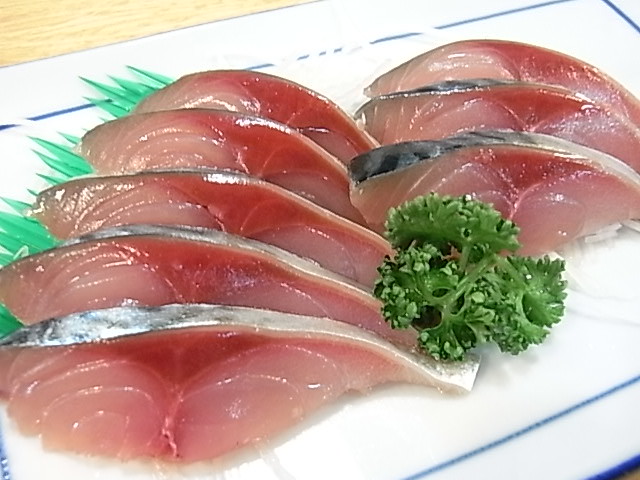 Though more popularly served grilled, saba is also enjoyed as sashimi when in season. Its oily flesh gives it a smooth, meaty flavor, which goes well with green onions and grated ginger. The oiliness also makes saba spoil quickly, which is why the fish is often preserved by lightly pickling it in vinegar to cut down on its fishiness and help it keep longer. The resulting dish, called shimesaba (as shown on the photo to the left), has a light, vinegared flavor. 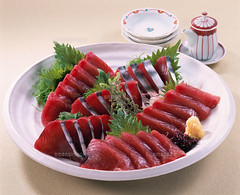 A central ingredient in fish stock (dashi), the katsuo is one of the most important fish in Japanese cuisine. Katsuo may be served as sashimi, but is more commonly eaten in a sashimi-like dish called Katsuo no Tataki, in which the katsuo loin is lightly seared around its edges, sliced, and served with a citrus based sauce together with garnishes such as garlic or grated ginger. 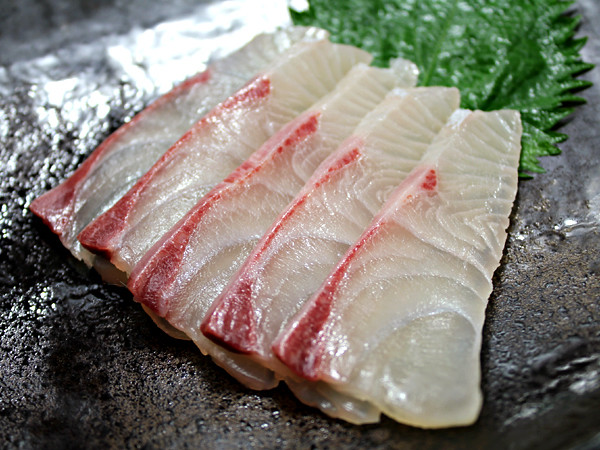 Kanpachi is a type of yellowtail that is commonly served as sashimi. Kanpachi looks very similar to buri (see below) except that it has a lighter, even more translucent color. The fish, which is lean and mild, is at its best in early summer. 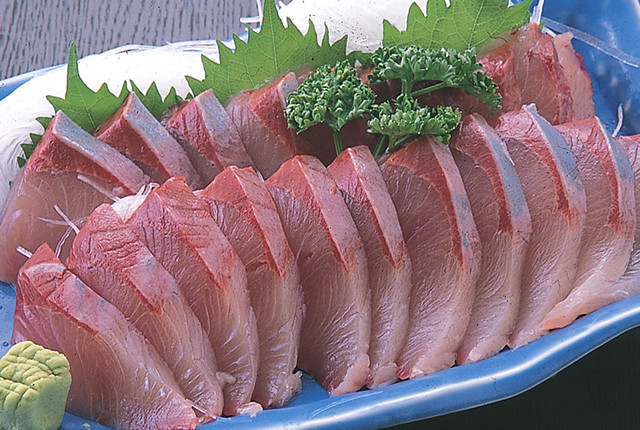 Closely related to kanpachi (see above), buri, also known as hamachi, is another commonly served yellowtail. Buri’s translucent, pinkish white flesh has a high fat content resulting in a rich, buttery flavor. Buri is available year round, but considered best in winter. 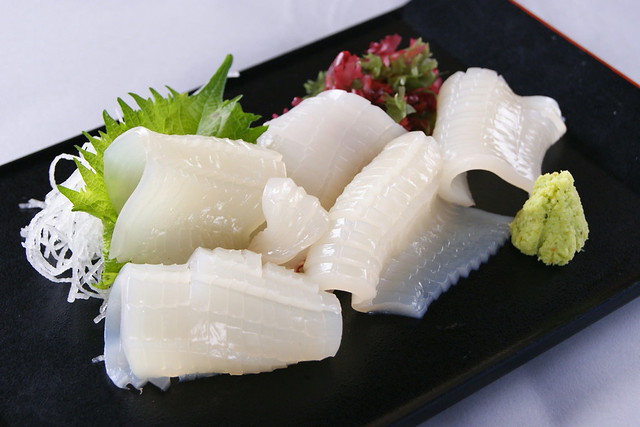 Ika is one of the most common types of seafood served as sashimi after tuna. While the squid’s legs are usually reserved for other dishes, the translucent white flesh of the ika’s mantle has a firm texture and a mild flavor. Ika sashimi is sometimes served in a style called ika somen (as shown on the photo to the left), where the flesh is cut into thin strips that resemble noodles. 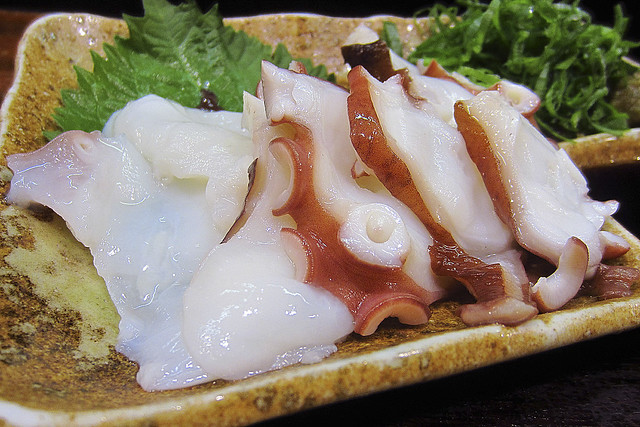 Tako is another typical item in Japanese cuisine; the tentacles are often thinly sliced and served as sashimi. Tako may be eaten raw, but is also commonly poached first which gives the flesh a sweeter flavor and firmer texture. 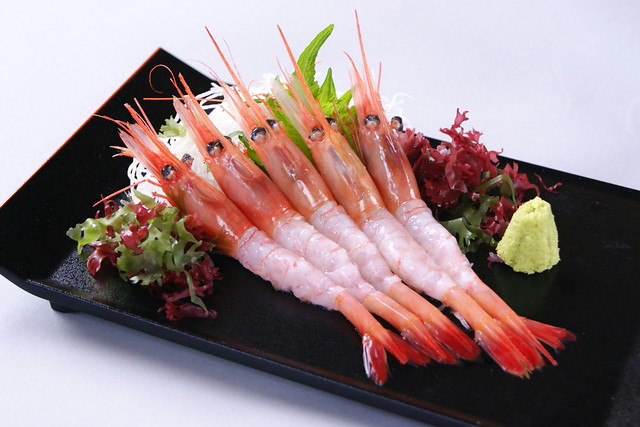 Of the various kinds of shrimps eaten in Japan, the one most commonly served raw is amaebi (sweet shrimp). Amaebi have a sweet, subtle flavor and are usually presented with most of the shell removed except for the tails, which some people eat. Some places that are famous for their amaebi include Niigata and Hokkaido. 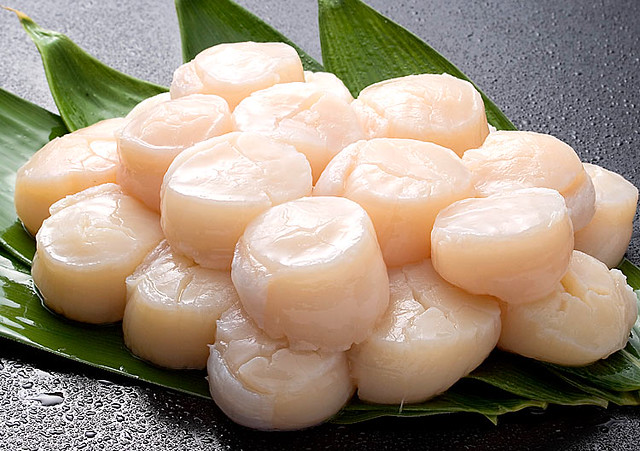 Hotate are one of the more prized shellfish in Japanese cuisine. The best hotate have a firm texture and a sweet, almost creamy taste. While it is common to serve the scallop’s thick, white abductor muscle alone, some restaurants also serve its viscera, the sharp bitterness of which contrasts nicely with the smooth, mild meat. Hokkaido and Aomori produce some of the best hotate in Japan. 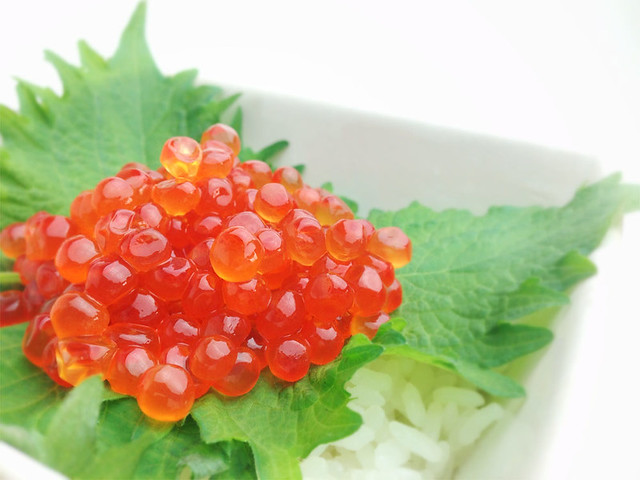 A type of caviar, ikura is cured in salt or soya sauce. The translucent, bright orange eggs are each about the size of a pea and have a rich, salty flavor that bursts in your mouth as you eat them. Some of the best ikura comes from Hokkaido. 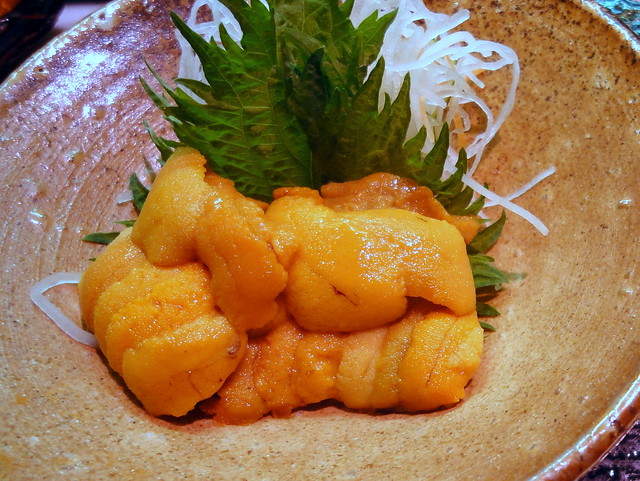 Uni is a particularly prized (and expensive) delicacy in Japan. The yellow to orange colored roe has a rich, buttery texture, and a sweet, briny flavor reminiscent of the ocean. Some of the best uni comes from Hokkaido.

Fullmetal Alchemist : One of The Pop...