Okonomiyaki is a popular pan fried food that consists of batter and cabbage. Selected toppings and ingredients are added which can vary greatly (anything from meat and seafood to wasabi and cheese). This variability is reflected in the dish’s name; “okonomi” literally means “to one’s liking”. The dish is available all over Japan, but is most popular in the west, particularly the cities of Hiroshima and Osaka.

Okonomiyaki is sometimes translated into English as “As-you-like-it Pancake”. However, this may be misleading. Though it does consist of batter cooked on a griddle, okonomiyaki has nothing of the sweetness or fluffiness of pancakes, not to mention that it is usually filled with octopus, shrimp, pork, yam or kimchi. A more accurate comparison, which is also made, is between okonomiyaki and pizza.

In Japan, people usually eat okonomiyaki at restaurants that specialize in the dish. At some of these restaurants the dining tables are each equipped with an iron griddle (“teppan”), and customers are given the ingredients to cook the meal themselves. As this can be rather daunting, the stages of cooking are enumerated below. Information about regional variations can be found thereafter.

The batter and the ingredients will usually be brought in a bowl. The customer is able to see that everything that was ordered is there, and that it is all fresh and of a good quality.

The batter and ingredients are mixed together thoroughly so that everything is evenly distributed.

After making sure the gas is on and applying oil to the cooking surface, the mixture is poured onto the hot griddle. Short metal spatulas are used to shape the batter into a circle.

When both sides of the okonomiyaki are cooked the toppings are added. The first layer is the okonomiyaki sauce, which looks and tastes like Worcestershire sauce. The sauce is applied to the Okonomiyaki with a brush.

Mayonnaise (kept in a tall, clear squeeze bottle) is added to the okonomiyaki, usually in zigzagging lines. Because mayonnaise is a relatively new addition to okonomiyaki, there are a few stores that do not have it available.

Small flakes of aonori, a dried seaweed, are sprinkled over the okonomiyaki with a little spoon. The aonori is usually stored right beside the katsuobushi.

The last step is the most enjoyable: eating the okonomiyaki! The spatulas are used to break off pieces to eat, and because the okonomiyaki is left on the griddle while eating, every bite is “fresh off the grill”.
For people who prefer to enjoy okonomiyaki without getting involved in the cooking process, there are also traditional restaurants, where the okonomiyaki are prepared by the chef and served ready to eat. Okonomiyaki is also quite easy to make at home. The flour consists of flour, water, eggs and cabbage.

As mentioned earlier, there are two main variations of okonomiyaki; Kansai Style (also called Osaka Style), and Hiroshima Style. The cooking steps above are for the Kansai Style, which is the style of okonomiyaki most commonly found in Japan. 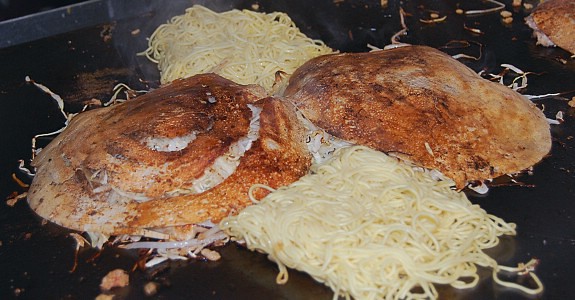