Itsukushima Shrine, located on Miyajima in Hiroshima, is well known for the mysterious view that the floating tori gate presents. This artcile will introduce the history and the secrets of Itsukushima Shrine.

THE HISTORY OF ITSUKUSHIMA SHRINE 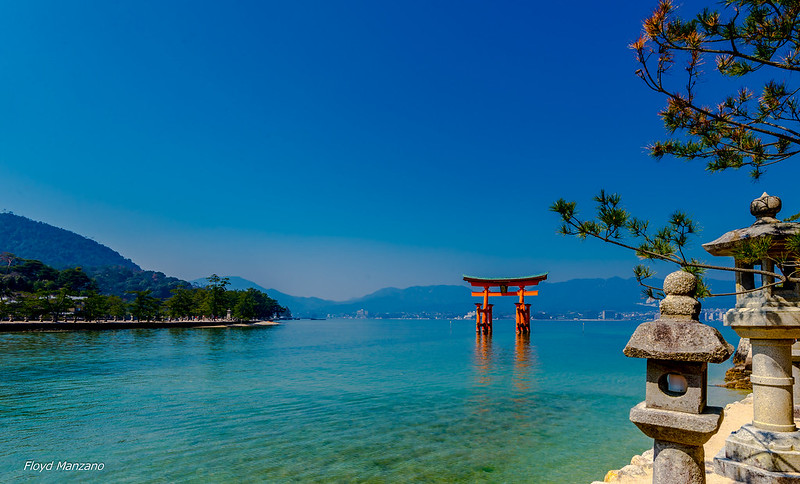 Itsukushima Shrine (厳島神社 Itsukushima Jinjya), is a Shinto shrine originally built in 593. Throughout its 1600-year-long history, the shrine has suffered from countless natural disasters, fires, and corrosion by seawater, but has been rebuilt by the help of the faithful worshipers.

The name “Itsukushima” is said to be from “神に斎く島 (Kami-ni-itsuku-shima) which means “the island that serves to god.” It is said that the shrine was built on the ocean in order not to damage the island by cutting down trees or digging the land, because people worshiped the island itself as a god.

The current building follows the same design as when it was rebuilt in 1168 by Kiyomori Taira (Japanese: 平清盛 Taira-no-Kiyomori), a military leader of the late Heian-period (Japanese: 平安時代 Heian-Jidai. Lasted from 794-1185) who established the first samurai-dominated admistrative government. Since Kiyomori worshiped the shrine very much and dedicated many treasures, the shrine is commonly associated with the Taira family.

3 THINGS TO SEE AT ITSUKUSHIMA SHRINE 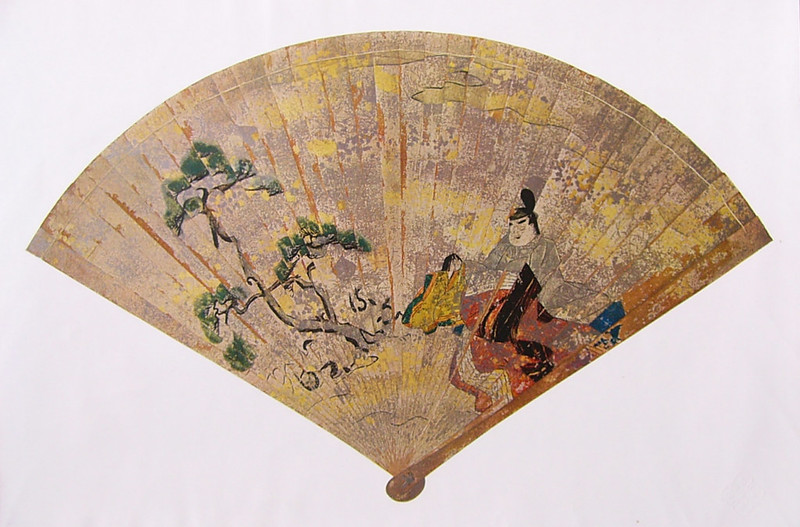 Not to mention the great architectures of Itsukushima Shrine, the shrine is also known for it’s large collection of treasures from the Heian Era (Japanese: 平安時代 Heian-Jidai. Lasted from 794 to 1185.) Though not all treasures are exhibited all year round, the shrine’s treasure museam keeps nearly 260 treasures, including “Heike-Nokyo” (Japanese: 平家納経 Heike Nokyo), one of Japan’s national treasures.

THE SECRETS OF ITSUKUSHIMA SHRINE 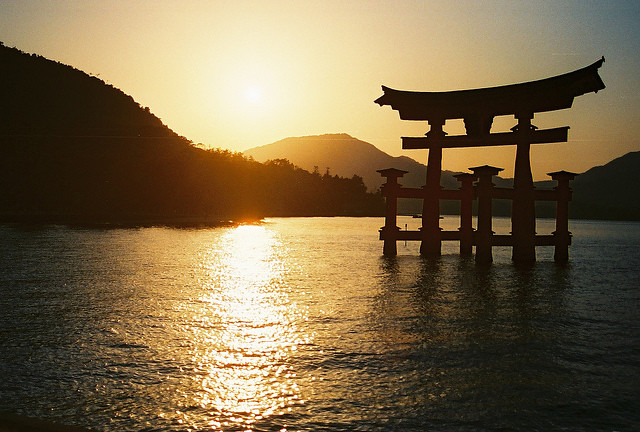 Though Itsukushima Shrine is a Shinto shrine, many influences from different religiouns can be seen. 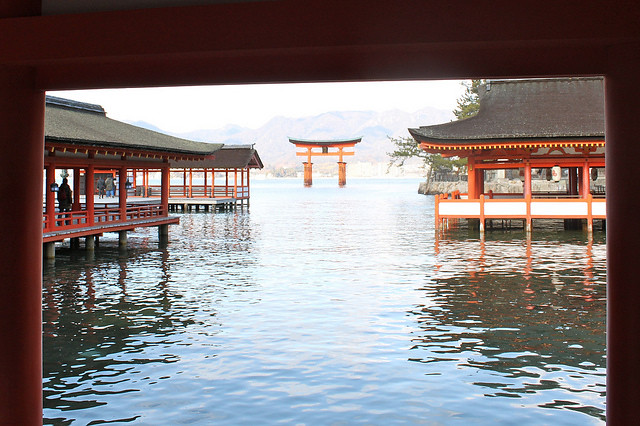 THE INFLUENCE OF THE YING-YANG PHILOSOPHY 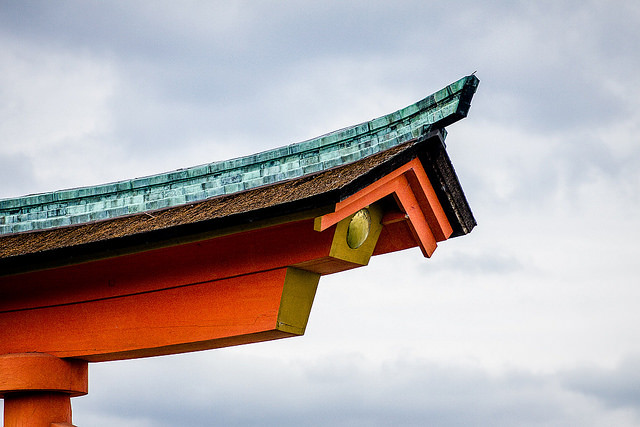 No.2 THE MAIN HALL 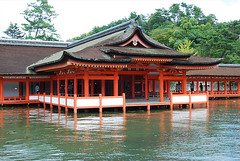 The Main Hall, which is designated as a national treasure, is one of the largest main halls (Japanese: 本殿 Honden) in Japan. It is valued not only for it’s uniqueness of standing on water, but also as one of the greatest Shinden style buildings. (Japanese: 寝殿造り Shinden-Zukuri. A style of architecture popular in the Heian era. It is known to have two buildings standing bilateral symetrically around the main hall.) The three goddesses enshrined here, are known as the three Munakata goddesses (Japanese: 宗像三女神 Munakata-san-megami), the goddesses of the sea.

No.1 THE TORII GATE

The Torii Gate (Japanese: 大鳥居 O-Torii), which is the iconic figure of Itsukushima Shrine, is 16 meters high, weighing approximately 60 tons. The present existing gate is the eighth one to be built, and it is said that it took over 20 years to find a tree that suited for it. The tree used for the gate is a camphor tree, which is known to be relatively tolerant to sea water.The unique part about this gate is that it does not have it’s pillars burried under ground, but stands on it’s own with it’s own weight. 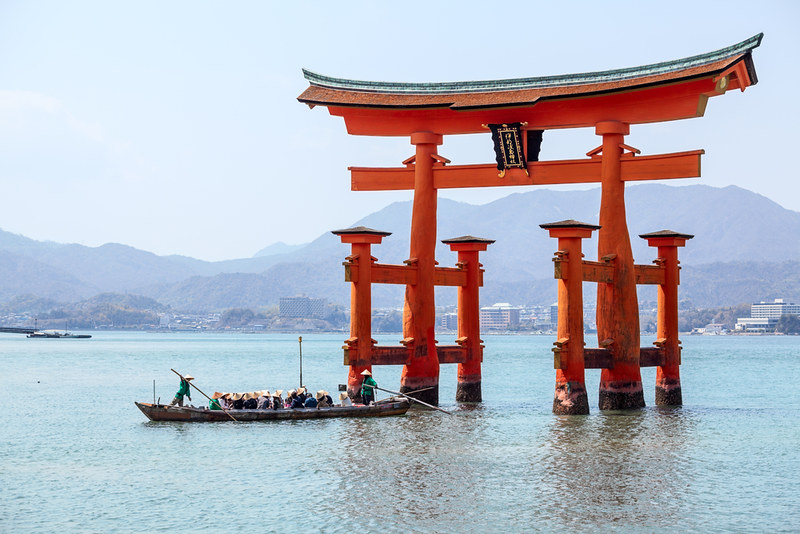 When the tide is high, you can enjoy the mysterious view of the Torii gate floating on the water. The beautiful contrast of the blue of the sea and the red of the Torii gate is a sight that one MUST see when they visit Japan. 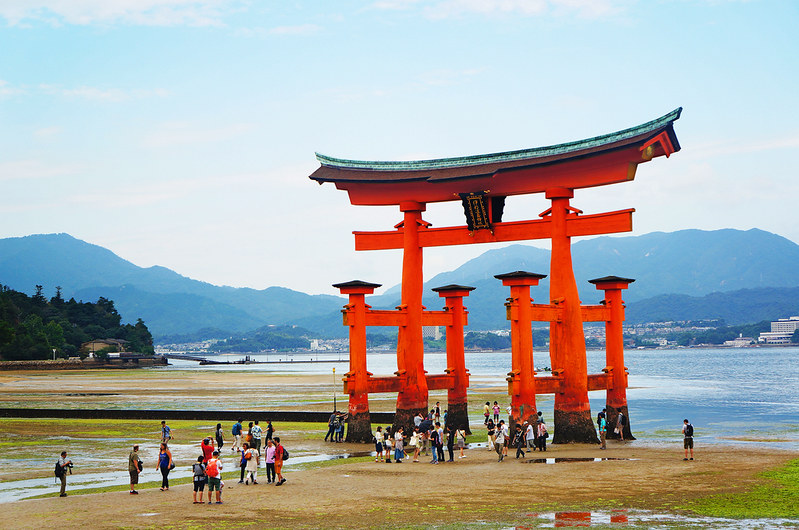 You can also walk over to the Torii Gate when the tide is low and see how it stands with your own eyes.

Visiting Tokyo Tower and Nearby Hots...

Get cozy in Ikebukuro’s New "Book an...